The Kardashians of Cambria County

Ha ha ha!  Made you look.  There are no Kardashians in Cambria County that I know of.  Do you? 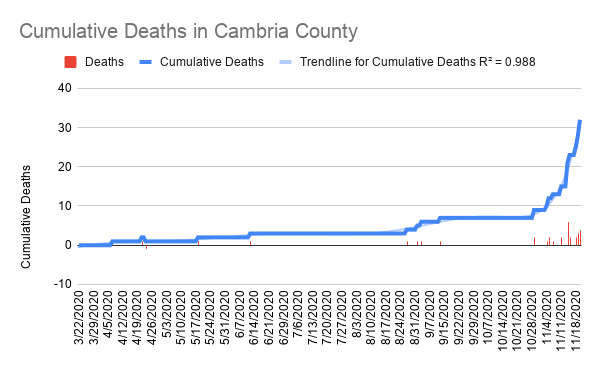 I could make this post about how mortality in Cambria County from COVID-19 has been skyrocketing this month (25 deaths since October 28).  However I thought I would comment on how I had to battle fluff in this county and what happens when what I post challenges the conventional wisdom.

Eleven days ago I posted on how Joe Biden won the city of Johnstown by 80 votes. I thought I would share some of the comments that I received on Facebook on that post.  The names are deleted out of respect.

"I can honestly believe that because the poll workers downtown were shady. They actually said who we were and what political party we were for."

"PA and Arizona have just pulled the win from Joe and Michigan is right behind . Joe is as of now down to 259 electoral vote and NO LONGER THE PROJECTED WINNER."

"Well seeing there is a lot of freeloaders in Johnstown I’m not surprised."

"(Name deleted)...excuse you read something watch the waters the democrats or about to go down in history as the most corrupt party joe biden has just become a suspect of treason in another country so like I said watch the water"

"Prolly had under age or dead people lol."

"I would think that is another johnstown, not pa."

I wonder how many of them actually read my post?

Also about my book, the Johnstown Area Heritage Association has refused to sell my book.  They said that because I discussed the statistics surrounding the abuse of children by Catholic Priests and crime statistics which include sexual assault that it was too explicit for children.  I would argue that their holocaust exhibit is more explicit.  I am waiting for an answer on whether the Johnstown National Flood Memorial will sell my book.  The book has been selling at other places such as Classic Elements, Young Hearts Books and Toys, Chameleon Bookstore,  Second Chapter Books in Ligonier and at Made in Somerset County.  I will be having a book signing at AT Merchant on December 5 from noon to 3PM in the Galleria Mall in Johnstown.  Finally you can read an Our Town article on my book here. 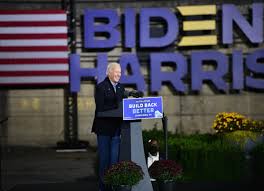 Four years ago Donald Trump won Cambria County with 66.8% of the vote.  This year he won the county with 67.9%.  Many observers were shocked that he won by such a large margin.  However when one looks at individual precincts a more complex pattern can emerge.
In 2017, looked at the precinct data for Johnstown and found that Hillary Clinton won the 20 precincts of the city by 83 votes.  This year I took another look at the precincts in the city and found that Biden won the city again by 80 votes.
This year there were 17 precincts in the city whereas there were 20 in the city four years ago.  Biden won 7 out of the 17 precincts (highlighted in yellow).  Hillary Clinton won 11 of the 20 precincts.
When the votes are totaled across the city, Biden won the city by 80 votes out of the 7,042 cast or 1.1%.  This margin is slightly smaller than the margin that Clinton won by (83 out of 6,438 cast or 1.3%).  Biden largest margin was in the seventh ward in terms of the number of votes (124) while for Trump it was in 8th ward number three (132).  Clinton likewise won the 7th ward at 166 while Percentagewise, Biden's best result was in Prospect at 78.9% (it was for Clinton as well at 82.1%) while for Trump it was in the 21st ward at 61.8% (in 2016 he won the 21st with 61.5%).
There were 118 (1,7% of the total) third party and write ins in the city this year while in 2016 there were 281 in the city (4.4% of the total).  In 2016 there were three third party candidates on the ballot (Green, Constitutional, Libertarian).  This year there was one (Libertarian).
Six hundred and four more people voted this year than in 2016.  The margins in the Trump precincts were closer than in Biden's. The large margins in Biden's precincts were large enough to offset those in the more numerous precincts for Trump.  This city is just as divided as the nation.
**Related Posts**

Election Reflections: Gains for PA Democrats Outside of Cambria County