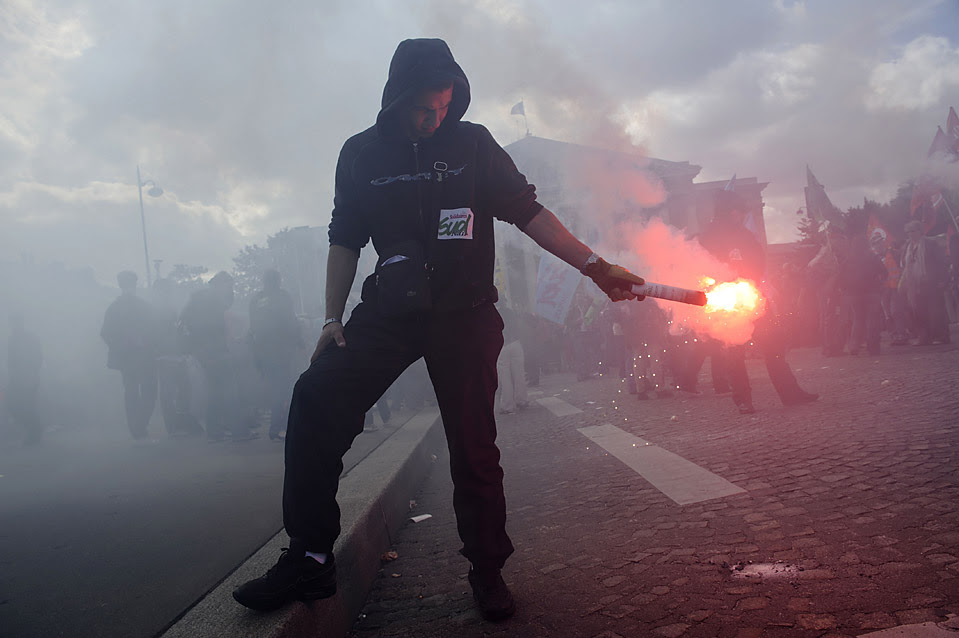 2010 can be called a year of anxiety. In Europe and the US, we see protesting because parts of both societies fear that their fabric is coming apart at the slightest suggestion of change. In France's case, the labor unions are staging nationwide strikes against President Nicolas Sarkozy's plan to raise the minimum retirement age from 60 to 62 to save money. In the photo to the right the protester's sign says "listen to the anger of the people." The protests are not expected to be successful and have caused considerable disruption in the country (the link to the article says that they are costing France more than $600 million per day). However they still have strong public support.

Similar protests have been occurring this year in Greece whose credit rating this year has taken a hit and has been forced to impose austerity measures after being bailed out by the European Union. Likewise austerity measures are occurring in Italy, Spain, Portugal, Great Britain, Ireland and other countries with strikes happening to protect their social safety nets. There just as here in the US immigration and Islamophobia are hot button issues that inflame passions across the political spectrum.

To us here in the US it may seem like whining given that Europeans get a lot more in social services from their governments than we do (though they pay more in taxes). Some belt tightening is necessary in tough times the Tea Party goers say. Here we have protests on the left and the right when changes are made to the social fabric but they are more sporadic. This year the Tea Party protests have gotten the most attention and they have had the most impact in the Republican primaries this year with them poised to gain in this year's elections. 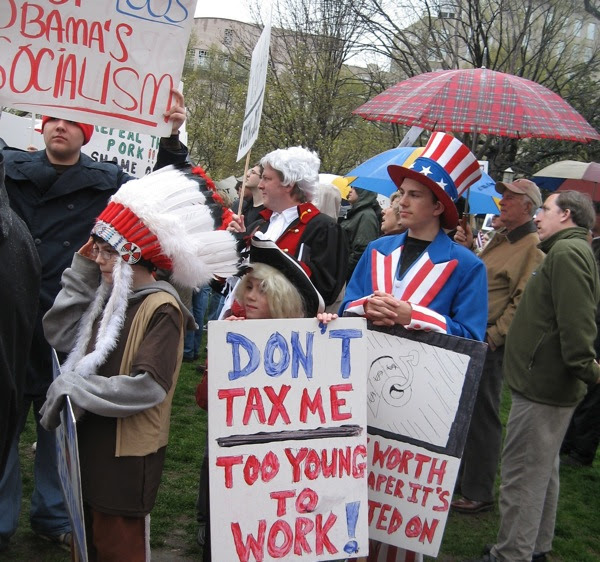 The Health Care Bill is one of the major things that has galvanized the Tea Party. They see no difference between the bill and the systems that are found in in Europe. Sarah Palin's Facebook posts and Fox News can whip them up into a tizzy now over things like imaginary death panels that they think would be used against grandma instead of real ones at HMOs that are being used now to deny needed care in the name of maintaining profit margins (some of which continues in the post linked here). 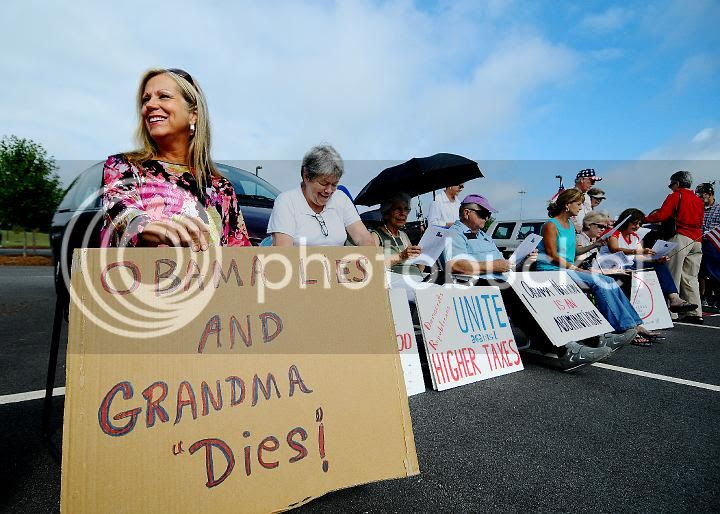 After shooting President Lincoln the crowd heard John Wilkes Booth shout "Sic semper tyrannus" which means thus always to tyrants in Latin. While he thought he was saving the south from some imaginary tyranny he had no problem with the very real tyranny the newly freed slaves had been experiencing for the previous 220 years in the US.

Conspiracy theories that many would consider insane are not confined to the right. The 9/11 truther movement has been convinced that the Bush Administration either was deliberately behind the attacks or they knew it was coming and deliberately did not lift a finger to stop it. Like the death panel claims, evidence for this has been sketchy (sketchy in the sense of seeing clouds in the sky that look like Ronald Reagan or Mumia Abu Jamal) at best but there is a tiny minority (which may be bigger in some other countries)that clings to this belief. 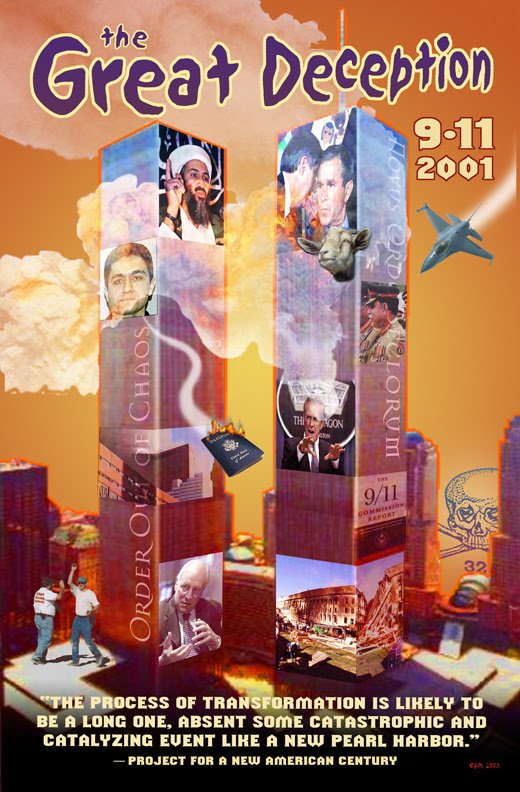 Getting to the title of this post the definition of what is sanity may seem to depend on one's political orientation. This type of sanity is unrelated to the type of insanity defined by the Diagnostic & Statistical Manual of the American Psychiatric Society. Most of these folks can hold a job, do not deviate from social norms, and are not a threat to themselves or others.

A Tea Partier may see both the protesters in France and 9/11 truthers here as insane and vice versa. It all depends on the context that the protests occur. It is often said that insanity is just a sane response to an insane situation.

Often when felt persecuted this poem by Pastor Martin Niemoller is quoted or paraphrased:

They came first for the Communists,
and I didn't speak up because I wasn't a Communist.

Then they came for the Jews,
and I didn't speak up because I wasn't a Jew.

Then they came for me
and by that time no one was left to speak up.

Their detractors may scoff when they're not actually being subjected to mass murder.

This Saturday I and thousands of others will be going to Washington, DC to the Rally to Restore Sanity and/or Keep Fear Alive as a satirical way of looking at how both are manipulated to serve everyone's purposes. Updates are to come. Last night President Obama did go on the The Daily Show but sounded defensive. 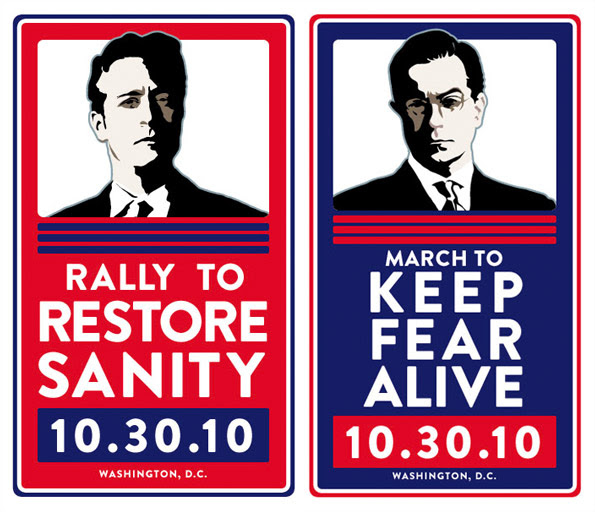 The Rally Experience I was at the rally and there were many thousands there. Having been at the protest rallies against the invasion of Iraq in DC in 2003 where there were about 100,000 people. In my opinion this definitely had a bigger crowd. The metros were backed up. I got to the mall about 40 minutes late. Comedy Central (Jon Stewart's network) did not seem to be prepared for the size of the crowd with too few jumbo-trons or a good enough sound system. There were people in trees and sitting on top of walk signals to get a better view. The video montage that I put together should give a good idea for what it was like being in the crowd.

It reminded me of being at St. Peter's Basilica in 2008 when Pope Benedict XVI was saying Mass on Pentecost Sunday when everyone was jockeying to get a better view of altar and there was security making sure no one rushed the altar(stage). This was a type of spiritual journey for those who came just as at it was at Glenn Beck's Restoring Honor rally seemed to be for his followers (it's tempting to quibble over the numbers at both rallies but I won't). Unlike protest rallies, rallies like these are needed sometimes as a catharsis.

This was my experience at the Vatican and Rome where they have more experience with crowds than Comedy Central.

To see some of the comedic highlights of the rally that I missed you can click the link below. Fr. Guido Sarducci gave the benediction at the beginning of the rally.

Getting back to the title question of this post What is Sanity? or more precisely what is sane? These two men sitting atop the Walk/Don't Walk lights (one of them dressed as a baby) and others sitting atop of portable toilets just to get a better view of Jon Stewart & Stephen Colbert telling jokes may not be the most sane thing to do depending on one's point of view. For them and the others like me there it filled a void that was missing in all of the bickering between different sides who are convinced that they are absolutely right. In the end what is right or true, a very elusive thing indeed, is what restores sanity. 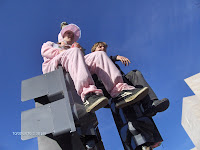 Stewart responds to critics on the left who wanted the rally to have a specific message. Everyone had their own expectations I guess.

Comedy Central's broadcast of the rally has been nominated for four Daytime Emmy awards against the Macy's Day parade and PBS's horse travel show Equitrekking.  Sounds like a fitting end for this post.


Morality as a Mathematical Equation
Posted by CSI without Dead Bodies at 6:59:00 AM