This year much has been made of the 150th anniversary of the beginning of the US Civil War.  Between the years 1861 and 1865 the United States of America changed, at the expense of over 600,000 lives or 2% of the population, from a loosely confederated grouping of agricultural states (eleven of which were agrarian slave holding states) to a united nation without slavery but with industrialization with social benefits and ills that would later have to be remedied.  These things are important to remember but it is important to consider similar world events going on at the same time which also had profound implications for the US and the rest of the world.

At the same time that Abraham Lincoln's administration was working to unite the United States: Otto von Bismarck was campaigning to turn Germany from a collection of confederated principalities into the first united German nation; Japan was conducting the Meiji Restoration which ended the rule of the Shoguns and the era of the Samurai; and Italy was experiencing the Risorgimento which united the peninsula for the first time since the Roman Empire. After having been occupied by Napoleon, who removed many medieval laws, the seeds of nationalism were planted throughout Europe.  Revolutions occurred against multinational monarchies in 1848 in throughout Europe.  Many disillusioned with these uprisings emmigrated to the United States and fought in the US Civil War (one out of five union soldiers was an immigrant).  Bismarck was minister-president of Prussia who through war and diplomacy was able to unite the principalities from 1862 to 1871 and then became the first Chancellor or Prime Minister of the united Germany until 1890.  Known as the "Iron Chancellor he made the famous quote "Laws are like sausages.  It's best not to see how both are made." a quote which modern sausage makers find very offensive.  Unlike Hitler he knew not to push his luck and he created a universal healthcare system which they still have today.  There was a period of German immigration to the US throughout the 19th century which continued after unification. 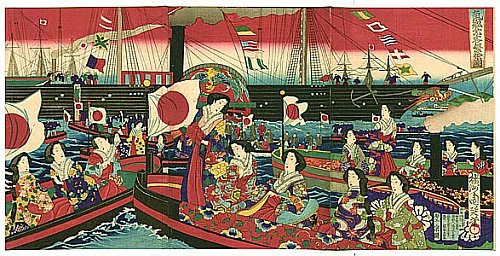 Similar to it's neighbor China, Japan had practiced centuries of isolation.  The Emperor had been a figurehead leader and the Shogun and Samurai had the real political power.  That began to end in 1853 when the United States signed a treaty opening trade and other nations soon followed suit.  To prevent the colonial domination that they saw occurring in China, the Emperor Meiji and a group of industrial oligarchs worked to seize power and westernize the country.  This was called the Meiji restoration which led to a period of rapid industrialization and colonization of Korea and Northern China afterward.  A period of Japanese immigration to the Western US began after this period.

After the collapse of the Roman Empire in 476 AD Italy fell influence of under wave after wave of foreign invaders including the Lombards, Byzantines, Normans, Austrians, Spanish and finally the French under Napoleon.  Like Germany, Napoleon had planted the seeds of unification when he had ruled there.  The northern states were dominated by Austria and France.  The center of the country was ruled by the Pope.  The south of Italy was called the Mezzogiorno (or mid day) and was ruled by a branch of the Bourbon family of mixed French and Spanish ancestry and was the poorest region of the country.  Each region had different dialects of Italian which were hardly understood by the other regions.

There were unsuccessful rebellions to reunify the country in 1830 and 1848 which were crushed by Austria, and France. In 1860 the State of Piedmont-Sardinia (Piemonte-Sardegna in Italian) created an invasion force led by Giuseppe Garibaldi which attacked Sicily first which was furthest from the influence of the large imperial powers in Europe and then moved northward.  His force found many willing volunteers to fight against the corrupt Bourbon regime in the south.  This is exactly what John Brown hoped would happen in his raid on Harper's Ferry Virginia in 1858.  The Risorgimento as the Italians call it had begun.

The campaign ran into more resistance as it moved northward.  The Papal States, France, and Austria had organized to prevent reunification but they had to contend with German reunification at the same time and France's leader Napoleon III was incompetent.  By 1861 Pope Pius IX became a prisoner of the Vatican City and refused to recognize the Italian state until Mussolini signed a treaty with him in the 1920's.  Presidents Abraham Lincoln and Jefferson Davis wrote letters to Pius hoping to win his sympathies.  Today Garibaldi is as much of a hero to the Italians as Ulysses S. Grant and Robert E. Lee are to the Americans.

These movements were all successful in creating united nations but still the process of rebuilding continued.  Although Germany had many great achievements in art, science is was still not given 'in crowd' status.  Fifty years later Germany entered World War I hoping to gain greater respectability and almost won but was punished severely afterward in the Treaty of Versailles.  Japan successfully fought Russia in 1905 and became the dominant power in Asia which later put it on a collision course with the US over control of a Pacific empire.

Italy experienced a period of uprising as high expectations by poor peasants were dashed after reunification.  Booker T. Washington traveled in Southern Italy and remarked that living conditions for the poor there were similar to that of southern sharecroppers in the US.  Garibaldi died in 1881 and was not a political leader.  After rebelling the great period of Italian immigration began to the United States (which included my grandparents), Australia, and the rest of North and South America in the late 19th and early 20th centuries.  A similar migration of African Americans within the US began as Jim Crow laws were passed in the south separating the races.

Of course 80 years after the these wars of unification, all four nations were major players in World War II and afterward were given major nation status.  Now the other minor players in that war are clamoring for more recognition...

On C-SPAN's After Words there is a good discussion of Great Britain's role in the US Civil War between Amanda Foreman who wrote A World on Fire: Britain's Crucial Role in the American Civil War with Historian Eric Foner.  I cannot embed the clip here but it can be heard at this link or seen here.