It seems to be a law of electoral politics that the most popular candidate is the one with the most messianic potential.  This can be seen on both the right and the left as many hoped Barack Obama would deliver the nation from eight years of George W. Bush.  After almost three years of Obama in office his opponents on the right and the tea party, according to the polls, are now looking to George W. Bush's successor in the Texas Governor's mansion, Rick Perry.  His supporters claim that he's produced ten straight balanced budgets while having a better employment situation than other states. 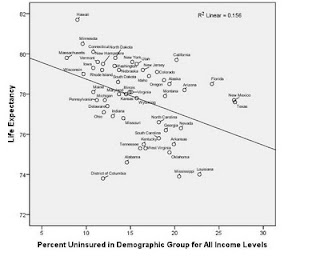 Looking at the state's official rate for July, 8.1%, it is lower than the national official rate of 9.1%.  There are problems with the way in which unemployment is measured (see related post below).  In my last post I talked about how his state led the nation in the rate of the uninsured at 26.8% in 2007 before the recession or approximately 5.7 million (2009 data will be released this fall by the Census Bureau to give an idea of the impact of the recession) and ranked fifth highest in those who were with in 200% of the federal poverty level at 36.1%.  With all of the state's income data considered for 2007, Texas ranks with the 22nd highest per capita income among the states.  This suggests that there is a wide income disparity in Texas.


The clip below gives a good discussion of the influence of religious right groups on Gov. Perry.  Of course we all want to work but the kind of job matters too.  We don't just need more jobs we all need better jobs.


**Update**
There is a new discussion of Perry's background and record in Texas on Democracy Now.
** Related Posts**