This Sunday CBS' 60 Minutes did an expose on 7 time Tour de France winner Lance Armstrong where his former teammate and close friend Tyler Hamilton accuse him on camera (and the piece also says that teammate George Hincapie testified this under oath secretly to a grand jury) of using the performance enhancing drug erythropoietin or EPO.  Part one of the 60 minutes interview can be seen above.  This is just the latest of many accusations made against him over the years.  His response has always been that he has been tested many times but no drugs have been found.  His most recent quote on his Facebook page is "20+ year career. 500 drug controls worldwide, in and out of competition. Never a failed test. I rest my case."

Using probability theory, it is possible to compute the chance of him never testing positive assuming that he was using EPO.  First we look at the probability of testing positive for the drug when you are really taking EPO.  This is determined by the test maker.  Finding this information is difficult.  The World Anti Doping Agency or WADA which oversees the testing of athletes does not readily provide this data on their webpage.  They do provide testing positive rates for each of their labs worldwide.  The probability equation for one test is given by:

A group of researchers in Denmark in 2008 gave EPO to a group of eight male non athlete volunteers, put them on exercise tests, took urine and blood samples from them, sent them to two WADA labs.  Post exercise one lab had no positive tests and another had 8 positives out of 40 samples or 20%.  Using the better case scenario lab (WADA does not agree with these results) that would mean that if this probability were accurate across his 20 year career and the outcome of each test was independent of the others, the probability of testing negative on each test over this period when he was using EPO equals

This example is of course an oversimplification.  The accuracy of screening tests does change over time as do doping drugs and masking agents.  This does not prove conclusively that Lance Armstrong never used EPO but it does illustrate how hard it would be to hide if WADA were doing an adequate job even with a test with 20% accuracy.  Part II of Hamilton's interview with 60 Minutes (abbreviated version below) can be seen here where Hamilton claims that Armstrong did fail a test in 2001 in the Tour of Switzerland. The report does raise questions about the integrity of WADA.

The news that Armstrong has been stripped of his seven tour titles and all of his other titles dating back to 1998 shouldn't be that surprising.  The interviews that I posted last year are available in abbreviated version above (they were originally available in full format) from CBS with no mention of his alleged failed 2001 drug test.  The full transcript of the 60 Minutes interview with Hamilton can be read here.  On CBS This Morning there was a discussion of the charges also with no mention of the 2001 failed drug test.  It seems strange that there is no mention of this as this allegation should not be hard to check out.  Armstrong was cleared of criminal wrongdoing.

Posted by CSI without Dead Bodies at 3:58:00 PM No comments: 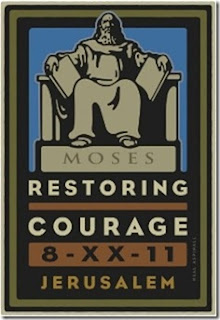 Did I call it? Glenn Beck is not really going away. After hearing that his show was ending on Fox News many on the left were ecstatic.  In my post Auf Wiedersehen Glenn Beck, Hello Merv Griffin I argued that he wasn't really going away, he was just branching out into other ventures just like Merv Griffin did when his talk show ended.  Today he announced that he is holding a Restoring Courage' rally this summer modeled on his Restoring Honor rally except this time it will be held in Israel.
Glenn Beck Is Going To Hold A Rally In Israel This Summer Called 'Restoring Courage'
This occurs as new nonviolent uprisings are occurring in Israel's occupied territories and struggles for democracy are occurring elsewhere in the Middle East (see video below).  Glenn Really knows how to raise the stakes.  His show on Fox ends on Dec. 31 of this year giving him plenty of time to inspire another Richard Poplawski, Byron Williams, or other wingnut.  If Fox News were really concerned about this they would have fired him on the spot.  Not everyone on the right advocates violence (a few on the left do too) but Beck definitely plays with fire.  How are Jon Stewart and Stephen Colbert going to top this one?
**Update**

Rachel Maddow has an update on Beck and Blackwater's antics in the Middle East.