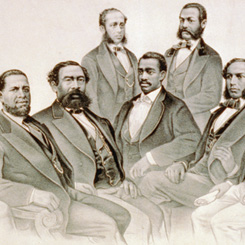 Enacted in the wake of the Civil War to correct the prior injustices which occurred, three constitutional amendments were ratified: the 13th in 1865 which banned slavery, the 14th in 1868 which I shall discuss later, and the 15th in 1865 which guaranteed the right to vote "on account of race, color, or previous condition of servitude" but unfortunately not gender.  That came in 1920 with the 19th amendment.  The 14th amendment is the longest of these amendments and comes in five sections.  It reads:

AMENDMENT XIV
Passed by Congress June 13, 1866. Ratified July 9, 1868.
Note: Article I, section 2, of the Constitution was modified by section 2 of the 14th amendment.
Section 1.
All persons born or naturalized in the United States, and subject to the jurisdiction thereof, are citizens of the United States and of the State wherein they reside. No State shall make or enforce any law which shall abridge the privileges or immunities of citizens of the United States; nor shall any State deprive any person of life, liberty, or property, without due process of law; nor deny to any person within its jurisdiction the equal protection of the laws.
Section 2.
Representatives shall be apportioned among the several States according to their respective numbers, counting the whole number of persons in each State, excluding Indians not taxed. But when the right to vote at any election for the choice of electors for President and Vice-President of the United States, Representatives in Congress, the Executive and Judicial officers of a State, or the members of the Legislature thereof, is denied to any of the male inhabitants of such State, being twenty-one years of age,* and citizens of the United States, or in any way abridged, except for participation in rebellion, or other crime, the basis of representation therein shall be reduced in the proportion which the number of such male citizens shall bear to the whole number of male citizens twenty-one years of age in such State.
Section 3.
No person shall be a Senator or Representative in Congress, or elector of President and Vice-President, or hold any office, civil or military, under the United States, or under any State, who, having previously taken an oath, as a member of Congress, or as an officer of the United States, or as a member of any State legislature, or as an executive or judicial officer of any State, to support the Constitution of the United States, shall have engaged in insurrection or rebellion against the same, or given aid or comfort to the enemies thereof. But Congress may by a vote of two-thirds of each House, remove such disability.
Section 4.
The validity of the public debt of the United States, authorized by law, including debts incurred for payment of pensions and bounties for services in suppressing insurrection or rebellion, shall not be questioned. But neither the United States nor any State shall assume or pay any debt or obligation incurred in aid of insurrection or rebellion against the United States, or any claim for the loss or emancipation of any slave; but all such debts, obligations and claims shall be held illegal and void.
Section 5.
The Congress shall have the power to enforce, by appropriate legislation, the provisions of this article.

Section 1 contains the equal protection clause and has been the legal foundation for the supreme court ruling banning segregation in the south, the Civil Rights Act of 1964, the Americans with Disabilities Act, same sex marriage, and many other civil rights laws.  It also contains birthright citizenship which many immigrants value.  Sections 2 and 3 are meant to prevent future secession by the states.  Stephen Colbert has a humorous discussion of how North Dakota might not meet Section 3.

Section 4 relates to the validity of public debt for the payment of pensions.  In the debt ceiling debate the Congressional Black Caucus, The Progressive Caucus, and Senator Bernie Sanders Called on President Obama to use this to bypass congress.  He declined.  Others state that the Supreme may have to get involved.

Before the 2010 election there was talk of amending first section of the 14th amendment to take away the birthright citizenship to those born to illegal immigrants. This is a good discussion of the implications of such a change.  Hopefully such talk has ended.

I called the 14th amendment the most versatile because it can be applied to everything from citizenship to public debt to civil rights.  Other amendments may be more sacred such as the first for civil rights, the second for gun lovers, or the fifth for criminals but they are for more specific things.  Health care reform is being challenged for it's constitutionality which the Supreme Court will have to resolve.  Detractors claim that the individual mandate violates individual rights.  Advocates claim that Article III gives Congress the responsibility to provide for the general welfare of the US population.  I'll bet the 14th may be used to resolve this dispute.

Rep. Donna Edwards D-MD talks about the deficit deal and invoking the 14th amendment as Standard and Poor's downgraded the US's credit rating for the first time.  This interview was before the downgrade.