Say it ain't so JoePa!

What a shock last night after coming home and hearing that the man who had personified Penn State football since before I was born had been fired after assuming that they would let him finish his last season.  While there are many things to be learned from this and the Catholic Church sex abuse scandal the biggest one for me is if you have knowledge of sexual abuse crimes being committed at an institution report it to the authorities no matter how morally pure you think that institution is.  The people who run them are human with moral failings.  We depend on idols for inspiration and an illusion of certainty when it is better to stick to the facts and dig for the truth.  Uncertainty is an uncomfortable feeling and is one that we need to learn to handle.

Even Democracy Now is talking about Joe Paterno and PennState in the context of another student occupy protest at UC Berkeley.

Concussions
Global Warming, Wikileaks, and Statistics: What Barry Sanders Can Teach Us
Change at My Alma Mater, IUP (Indiana University of Pennsylvania). Undergrads Getting Squeezed
Super Bowl XLV: A Battle of Champions Who Couldn't Compete Now Without a Salary Cap


Statistics and Old Beliefs
Posted by CSI without Dead Bodies at 7:36:00 AM 2 comments: 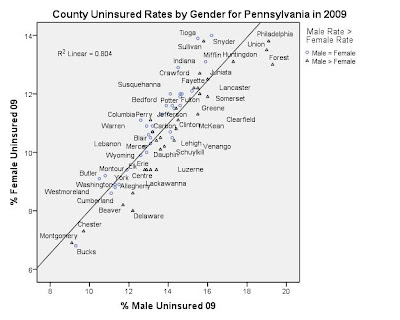 The new SAHIE estimates use a new survey, The American Community Survey, to derive it's estimates of the uninsured for each county for 2008 and 2009.  Previously the Census Bureau used the current population survey.  This may partly explain why the 2009 estimates look somewhat different for the new estimates (especially Centre County home of Penn State U see last post).  One nice new feature of the new estimates is that it gives the estimates by gender for each county and state.
For Pennsylvania in 2009 the rate was 13.3% in males (+/- 0.3% margin of error) and 10.0% in females (+/- 0.2%).  Because the margin of errors in the rates do not overlap we can be confident that the rates are significantly different.  The rates were estimated using Bayesian methods.

With the exception of Philadelphia County, the biggest discrepancies are seen in the counties with the highest rates and low populations.  The discrepancies in the rates (those which deviate most from the straight line in the graph) can be attributed to women having lower incomes and being more likely to qualify for Medicaid.

The rates for all 67 counties by gender are given below. 31 out of the 67 or 46.3% of the counties have rates that are significantly higher for men.  To determine this, for example for Allegheny County (where Pittsburgh is) take the male rate of 12.2% and add & subtract the margin of error (MOE for short) to get the upper and lower bounds for males and females respectively.  For men in Allegheny County it is 13.8% and 10.6% and for women it is 10.0% and 7.2% respectively.  Because the upper and lower bounds for both genders do not overlap we can be confident that the rates are different for Allegheny county and 30 others in Pennsylvania.


**Related Posts**
News Health Care for All Pennsylvania
Posted by CSI without Dead Bodies at 3:56:00 PM No comments: