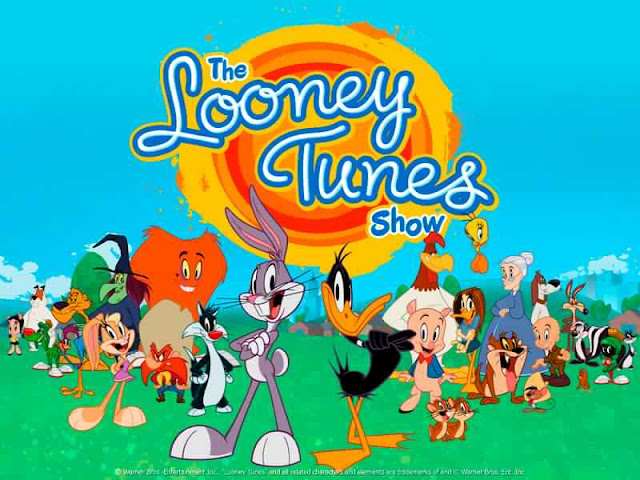 We all remember the short films with Bugs Bunny, Daffy Duck, Porky Pig, Elmer Fudd, and the rest of the Looney Tunes gang from Warner Brothers which were voiced by Mel Blanc and June Foray and directed by Chuck Jones for over 50 years. Those cartoons had lots of funny slapstick. Now Warner Brothers has come out with new cartoons in a sitcom format on the Cartoon Network for grownups and kids.

Bugs Bunny no longer lives in a hole in the ground. He lives in a normal house as the inventor of the carrot peeler. He plays more the wisecracking straight man in this series.

Daffy Duck is basically the same as a freeloading housemate of Bugs. The twist for him this time is that his character has the potential to grow and mature. Him and Bugs have romantic interests, street smart Tina (a Duck) and a fun loving Lola (a bunny voiced by SNL's Kristin Wiig nominated for an Emmy for this) as can be seen in the YouTube clip below. It must be hard for them to kiss with those beaks and buck teeth. The content doesn’t get inappropriate for children.


Other changes to the characters include Porky Pig being a boring accountant. Yosemite Sam, rather than being Bugs mortal enemy, is his annoying neighbor. The Tasmanian Devil is now Bugs’ house pet. Speedy Gonzalez now runs a pizza shop. Marvin the Martian was an exchange student from Mars while in high school with Daffy and Porky and no longer wants to destroy the Earth. Sylvester, Tweety, and Granny are basically the same but their pasts are more complicated. Foghorn Leghorn is now an overblown business tycoon. Elmer Fudd is a TV newsman. Mac and Tosh are two gophers (like Chip and Dale from Disney) who are extremely close.

These changes do work in this format where the characters have more room to move. This show is not totally divorced from it’s slapstick roots but so far without explosions. Road Runner/Coyote shorts are included with a modern twist.

Warner Brothers reasons for doing these changes now with a very established formula can be open to speculation. Are they trying to mature the characters as the audience matures? If that were the case they might have tried maturing the characters a long time ago. Another reason could be that audiences want more complex/less violent cartoons that adults as well as children can enjoy.

The Cartoon Network has undertaken a stop bullying campaign. There is scientific research showing that exposure to violence in the media is a causal factor (meaning that it makes it more likely) violent behavior in children and adults. While one can find lots of violence in the network’s other programs, including the old Looney Tunes and Tom & Jerry cartoons which are still popular, it seems that this retooling may partly be in conjunction with the stop bullying campaign. 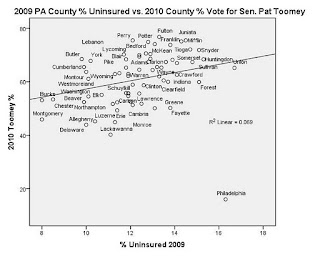 My new guest post on the PUSH website is now up looking at the uninsured and the 2010 PA Senate race.
PUSH: Correlating PA's Uninsured with Sen Pat Toomey's 2010 Vote
**Related Posts**