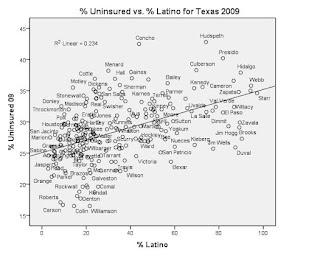 Texas now added itself to the five other states above in dark red which will not participate in the ACA medicaid expansion even though it leads the nation in the percent uninsured at 26.3% and is correlated most strongly with income and the % Latino population at the county level. Here is Texas Gov. Rick Perry's justification: 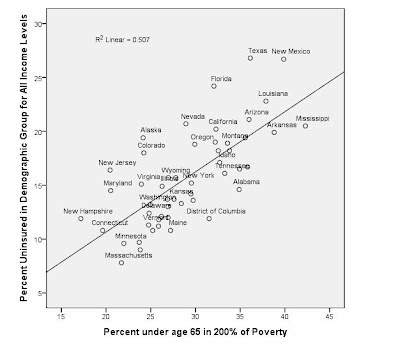 Pennsylvania is listed in the top graphic as undecided toward participating.  Ezra Klein believes all states will eventually sign up as they are reimbursed.  The right graphic shows four of the six states, Texas, Florida, Louisiana, and Mississippi, having having some of the highest within 200% of federal poverty (Mississippi, try living on that governors) and uninsured (Texas) rates in the US. South Carolina and Wisconsin had  19.4% and 10.6% uninsured rates and 30.9% and 20.9% 200% poverty rates in 2009 respectively.

PUSH-Healthcare for All PA SCOTUS Posts

I have been posting less on this blog lately partly because things have been heating up on the Pennsylvanian's United for Single Payer/Healthcare for All PA site in the wake of the Supreme Court's decision on the Affordable Care Act (aka Obamacare).  For example our new blogger Scott Tyson, MD has posted articles by state organization President Dave Steil and state executive director Chuck Pennacchio on the One Payer States Meeting.  Lloyd Stires has posts on the day before and after the SCOTUS decision and one where he comments on the effect of propaganda on the public's understanding of the Act.  MaryPat Donegan has written an announcement of an upcoming strategy meeting for the organization this Saturday July 14.     Finally I have written posts on polling before the decision on some polls which ask about the reasons for the laws unpopularity show that a stronger bill would be more popular.  Post SCOTUS decision I wrote on what the implications of Gov. Tom Corbett's (R-PA) decision to expand Medicaid could be in light of past decisions.
Posted by CSI without Dead Bodies at 9:21:00 PM No comments: