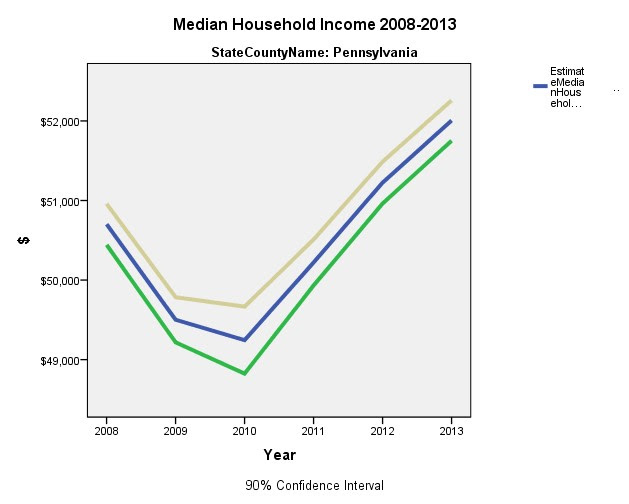 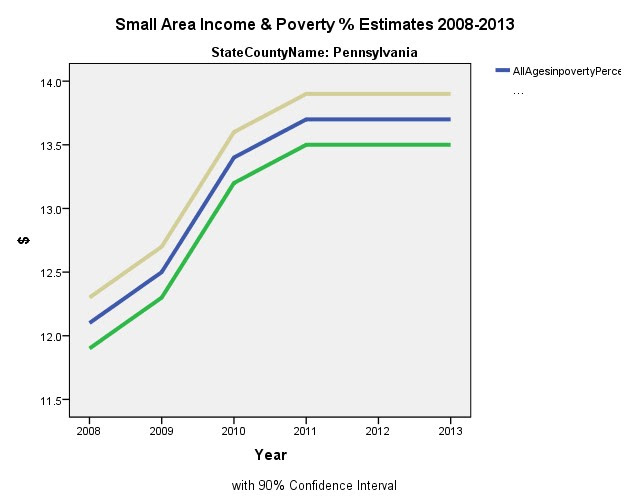 The Census Bureau has released the 2013 Small Area Income and Poverty Estimates (SAIPE) for all states, counties, and school districts in the US. The graphs showing the rates for 2008-2013 are presented for the graphs above with 90% confidence bounds for the estimates for the % in poverty and the state Median income for the state of Pennsylvania. The blue line represents the estimates while the light green line represents the upper bound and the dark green line represents the lower. The top graph shows that median income (the median is the value that appears in the middle of incomes when they are ranked from highest to lowest) has steadily increased since 2010 after decreasing from 2008 to 2010. A different pattern emerges for the poverty estimates in the second graph for the state. It shows a steady increase in poverty levels from 2008 to 2011 with a leveling off for 2011 to 2013. Graphs for Allegheny County are below. 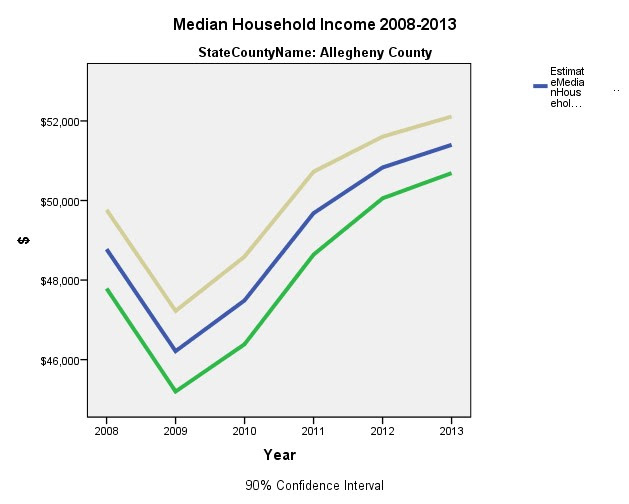 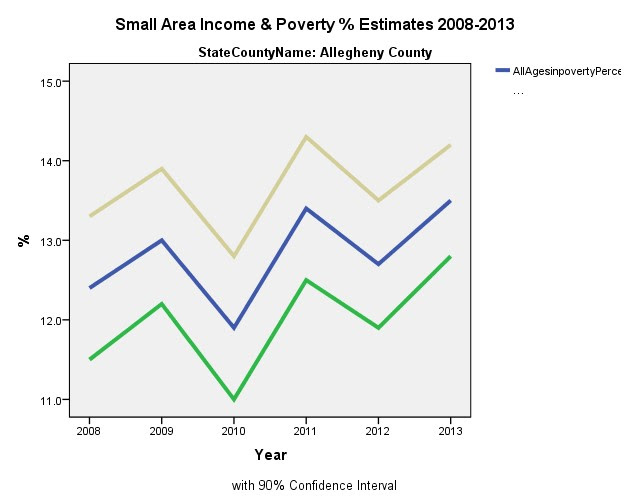 If we look at the county level estimates, a different emerges for each county and school district. Like the state, median income increased for Allegheny County from 2009-2013. Poverty estimates increased from 2010 to 2013 with the other years relatively equal. The larger the population of the county is, the narrower the confidence bounds are for the estimates. School District level estimates for child poverty are available and presented in the map below. There are too many districts presented to present in table form and graphically for years 2008 to 2013. The districts with the highest poverty rates are listed below the map. The top four counties are in the Pittsburgh Area and the fifth highest in the Reading district.  The Greater Johnstown School District ranks sixth with 40.7%.  All of the top six have estimates above 40%. Posted by CSI without Dead Bodies at 1:48:00 PM No comments: 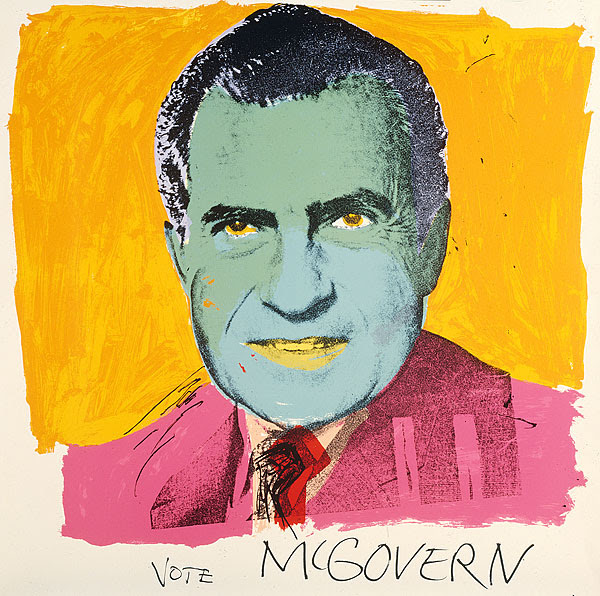 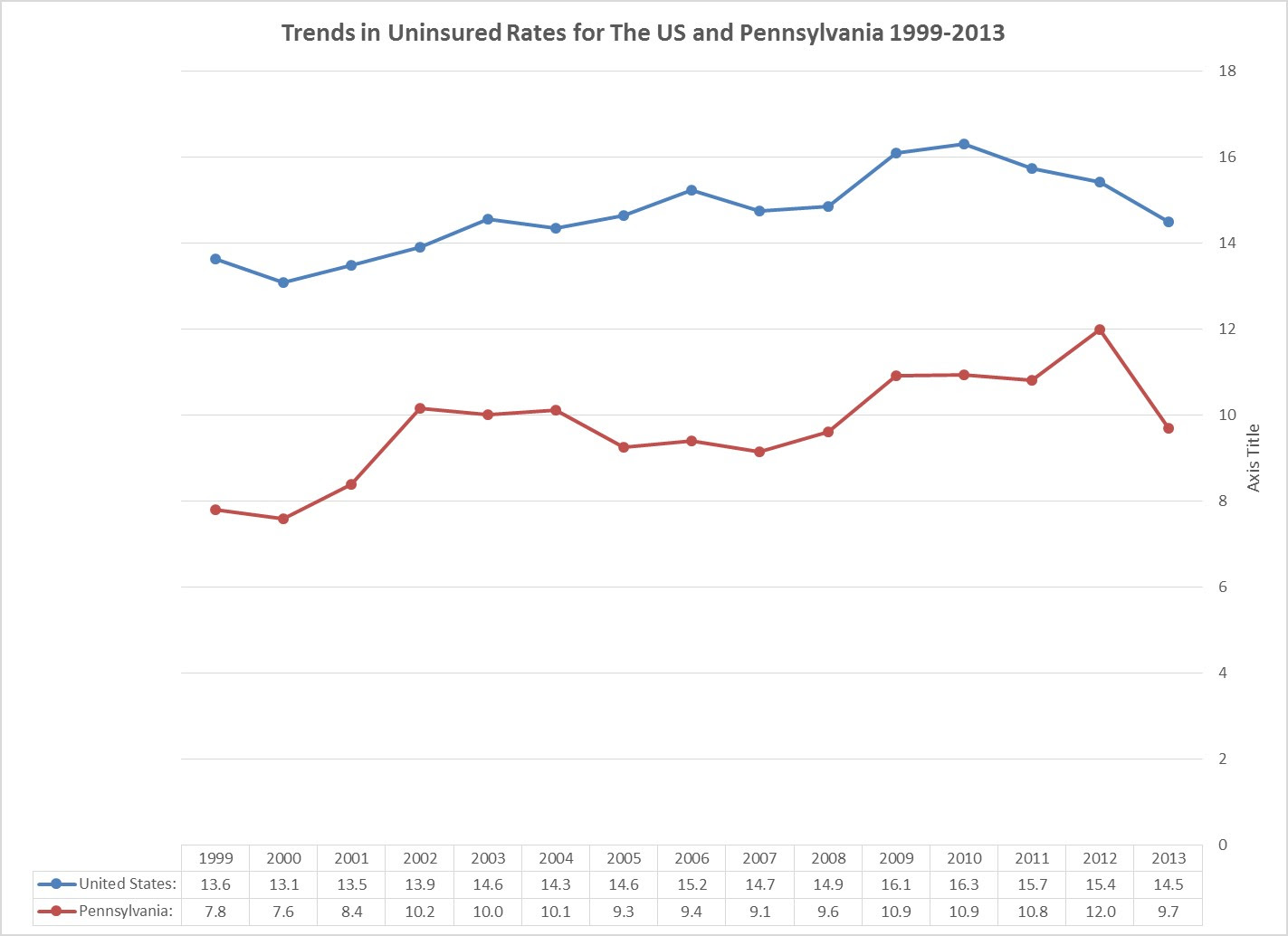 The Census Bureau has come out with estimates from the American Community Survey of national and state level uninsured rates for 2013. County level estimates are due out in early 2015. Pennsylvania's rate has decreased from 12.0% in 2012 to 9.7% in 2013 (when the Affordable Care Act (ACA) came into effect in October of 2013). The state and national rates are now comparable to pre-recession levels in 2008. Below is a table with the rates for all states plus DC in 2013 in order of highest to lowest rates. Pennsylvania ranks 42nd, Vermont (which is backtracking on it's commitment to single payer) ranks 48th with a rate of 7.2%. As in previous estimates, Texas leads the nation with a rate of 22.1% but it is down from a high of 25.5% 2009.

Gruber Healthcare Hearing: "Are You Stupid?"

Lost in the coverage of the Senate torture report and the demonstrations on the deaths Mike Brown and Eric Garner (which are important stories for a change) was the congressional testimony of MIT economist Jonathan Gruber.  He was caught on tape saying that the Affordable Care Act (aka Obamacare or ACA) had to be sold as a non-tax because of the "stupidity" of the American voter.

When he appeared before a congressional committee he was asked directly "Are you stupid?"  He politely apologized for his comments but is there really any doubt that he meant it at the time.  He was recorded on several occasions saying it.  Was he referring to his perceived stupidity of the Tea Party voter or the Single Payer voter?  Maybe both.  Gruber did work with Mitt Romney when he was governor of Massachusetts

I have cited many surveys which indicate the both the Tea Party voter and the rest of the electorate are not as stupid as Gruber believes.  The polls have consistently suggested that the individual mandate was the least popular part of the ACA.  The other provisions, expanding Medicaid, banning the denial of coverage for preexisting conditions and subsidies for low incomes to buy insurance are popular among all Democrats, Independents and Republican voters.  Pretty consistently, if one adds those who support a better bill (i.e. Single Payer) to those who support the ACA, one has a majority.

Of course Republicans are not above relying on the perceived stupidity of the voter to get things passed too such as pushing the imaginary Iraq-Al Qaeda-9/11 connection to the US public to sell a disastrous invasion in 2003.

Posted by CSI without Dead Bodies at 5:02:00 PM No comments:

I Know I've Been Away

I've been busy with teaching and working.  There have been lots of things to blog about but a lot of these things, ISIS, health care, the election, and immigration are things I've written about before.  I haven't written as much on topics related to Ferguson, Missouri and racism.  I missed PodCamp this year because I was so busy.  I will to be back now that the semester is ending.  Those of you who follow the blog on Facebook and Twitter may have noticed me posting about my friend David Roberts who passed away from Brain Cancer and his family is now raising money to cover medical debts.  Happy Holidays to all!  I leave you all with a video of my recent trip to Maine of the oldest lighthouse in the US.

Posted by CSI without Dead Bodies at 3:47:00 PM No comments: 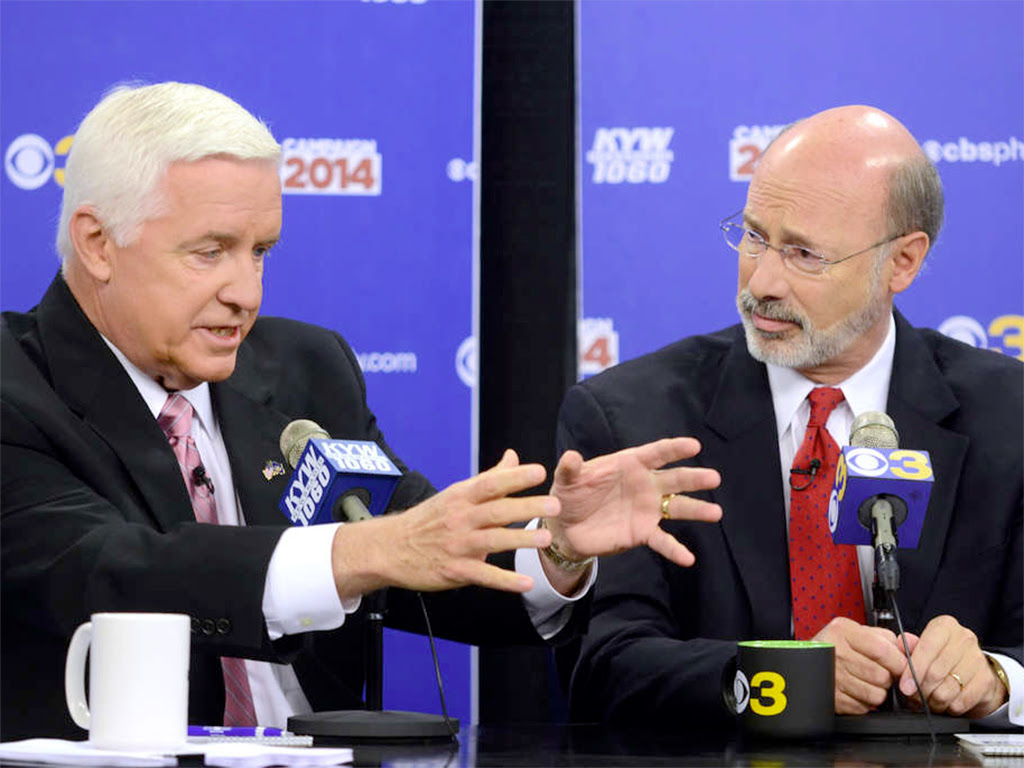 Gov. Corbett has conceded defeat in this years gubernatorial race with 55% of the vote as of this posting.  The NBC exit poll asked voters a variety of questions which showed Governor Elect Tom Wolf winning almost every demographic in the state: males, females, young, middle age.  Corbett and Wolf evenly split the 65+ age group.  Of most interest for Healthcare for All PA is the question on voters opinion of the Affordable Care Act as can be seen below.  47% thought it “went too far”, 23% thought it “Was about right”, and 27% thought it “did not go far enough”.  If you add the those who said “Did not go far enough” to those who thought it “Was about right” there is a 50% majority for universal health care with more than half of those wanting a better bill.

These results are consistent with the exit poll for Pennsylvania from 2012 as well as national polls on the Affordable Care Act as can be seen in the related posts below.