As the school year begins, I was looking at the Alumni newsletter from my alma mater, Bishop McCort High School in Johnstown, PA.  They had a listing of last year’s graduating class; their names, where they were going to college or if they had other plans, and whether or not they were in the National Honor Society (NHS).  As luck would have it, I found the program from my high school graduation in 1988 which shows the exact same information.  I thought I would take a deeper look at how the classes differ.

The McCort class of ’88 had 148 graduates.  The class of ’16 had 97.  The tuition in 1988 was about $900. Now it is $6,500.  The class of ’16 had 5 exchange students from China while my class had no exchange students.  The program said the class of ’16 had received $7 million in scholarships, 92% were going to college, 6,200 hours of community service was performed, and 33 students had parents who were alumni.  I don’t know how many scholarships, hours of community service, or students who had alumni parents but I do know that 90% of my class pursued higher education (more on that later).

I next compared the two classes on the number who were in the NHS.  The table below shows the raw numbers for both classes.  There was a higher percentage of students in the NHS in the class of ’16 (32%) than in the class of ’88 (23%).  According to the McCort website, students now need a 96% cumulative average which is equivalent to a 3.6 grade point average (GPA).  When I was there a student needed a cumulative 3.3 GPA to be accepted into the NHS and have a good disciplinary record.  The grading system when I was there looks the same as it is now.


Because I have yearbooks from each year I was a student at McCort, I decided to look at the preceding 3 graduation classes from mine on the percentage of the class in the NHS.  None of these classes had the same percentage in the NHS and the classes of ’86 and ’87 were somewhat lower.  A chi-square test for the equality of the classes shows that the 2016 class had a higher percentage than the 4 classes in the late 80’s.


I don’t know the reasons for the higher percentage in the class of 2016.  It could be that they are brighter as the criteria for membership is more stringent than it was when I was there.  It could be that because the class was smaller the students had more individual attention.  Next I will look at differences in how the class of ’16 and ’88 differed with respect to which the plans for the future on graduation day.  I don't have the graduation programs from the classes of '85, '86, or '87 for comparison. 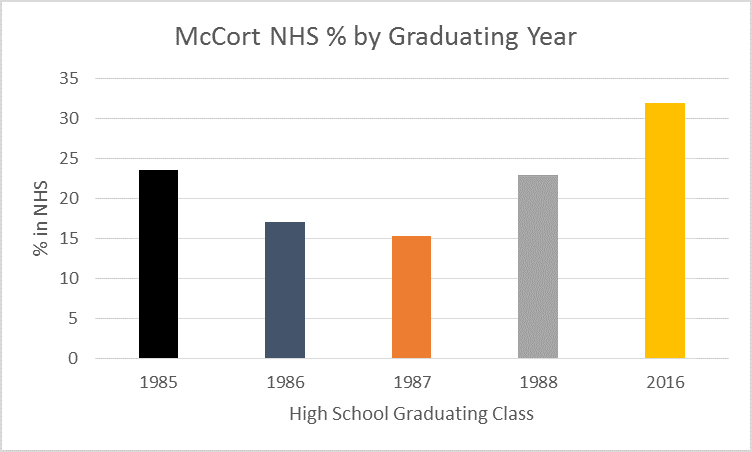 Many say that being in the NHS doesn't really matter in the long run but it did matter to me when I was in high school and it did matter to the school or they wouldn't publicize it in their alumni newsletter.  I would study my but off and miss it by a few points.


A Morsel of Mensa Measurement