In my post from two weeks ago, I noticed that there were higher levels of hate group activity in states where Trump and Clinton won their primaries.  Does that mean that members of hate groups are more likely to support Clinton and Trump?  Not necessarily. 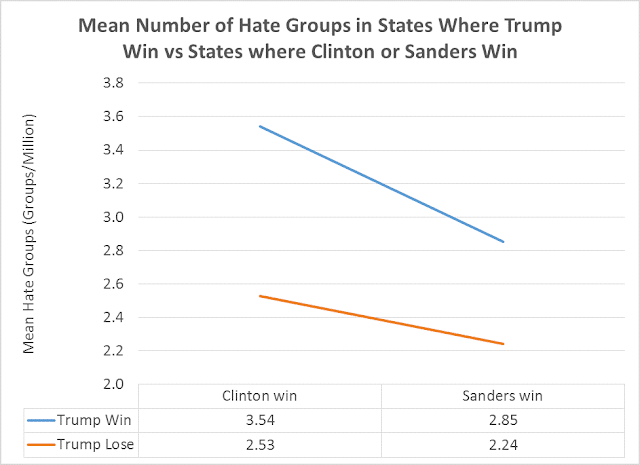 The "state" with the highest concentration of hate groups, DC at 26.8 groups/million residents, was not included because the Democrats won't have their contest there until June 14.  Trump placed third there.

The higher concentration of hate groups in states where Clinton and Trump win may reflect support from these groups on Trumps side while fear of these groups could be driving Clinton's support on her side.  This is borne out in the exit polls from these states with nonwhite voters overwhelmingly supporting Clinton in these states and with prominent white supremacists supporting Trump nationwide.

Posted by CSI without Dead Bodies at 6:34:00 PM No comments: