What Effect Do 3rd Parties Have on Trump and Clinton? 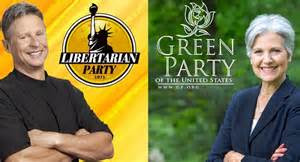 Now that the primary season is over and the two major parties are gearing up for the conventions and Trump and Clinton's Vice Presidential picks, there have been a wealth of state and national polls looking at the state of the race.  All polls have asked respondents about the head to head or tow way match up between Clinton and Trump.  Given the high rate of dissatisfaction with the candidates this year, a number of polls have also asked respondents about the most prominent third party candidates, Fmr. Gov. Gary Johnson as the Libertarian Candidate from New Mexico and Dr. Jill Stein of the Green Party from Massachusetts.

Any time a third party candidate makes significant gains in the polls the argument comes from the major parties "don't waste your vote on a candidate who's not going to win."  I thought I would take a look at how the polls compare when respondents are asked about a 2 candidate race (Trump and Clinton), a 3 candidate race (Trump, Clinton, and Johnson) and a 4 candidate race  (Trump, Clinton, Johnson and Stein).  The poll differentials between Clinton and Trump are presented in the table above for 11 polling organizations.  A positive value means that Clinton is ahead and a negative value (seen only in the Rasmussen poll) means that Trump is ahead.

Presenting the means of all the organizations regardless of whether or not they asked respondents about the 2, 3 or 4 person race shows little difference in the gap Clinton and Trump with mean gaps of 4.64%, 4.78%, and 4.75% respectively.  These were the Real Clear Politics polling averages as of yesterday.

Two polls (Rasmussen, and USA Today/Suffolk) restricted their samples to likely voters whereas the remaining organizations included all registered voters.  When those two organizations were excluded from the mean differences the gap changed to 5.44% in a 2 way race, 4.88% in a 3 way race, and 4.83% in a 4 way race.

What does all this mean? It means that when poll respondents are asked about a 3-way race between Clinton, Trump, and Johnson the gap between Clinton and Trump narrows by 1.25%. When respondents are asked about a race with Jill Stein added as a candidate the gap between Clinton and Trump does not change at all.  At the moment at least the major parties do not have too much to worry about with the third party candidates.  As a former Governor, Johnson may have somewhat more name recognition than Stein.  Which may or may not change as the race progresses.

Harry Enten at FiveThirtyEight.com (run by Nate Silver) came out with a similar post to mine at almost the same time which shows that Gary Johnson hurts Clinton more than Trump.  You can read it here:

Posted by CSI without Dead Bodies at 4:50:00 PM No comments: