This week the Southern Poverty Law Center came out with it's hate map for 2016.  They found an increase in the total number of hate groups in the US from 892 in 2015 to 917 in 2016.  For the last three years I have been adjusting the hate group numbers for the population in the US and in each state as the number of groups per million residents.  The hate group rate did increase from 2.78 to 2.84 groups per million residents in 2016.  This increase is being driven by primarily by increases in anti muslim hate groups.  You can see the numbers from 2016 and 2015 in the table at the bottom of the post.  The number of hate groups is still below the all time high of 1,018 groups in 2011 which gives a hate group rate of 3.27 groups per million. 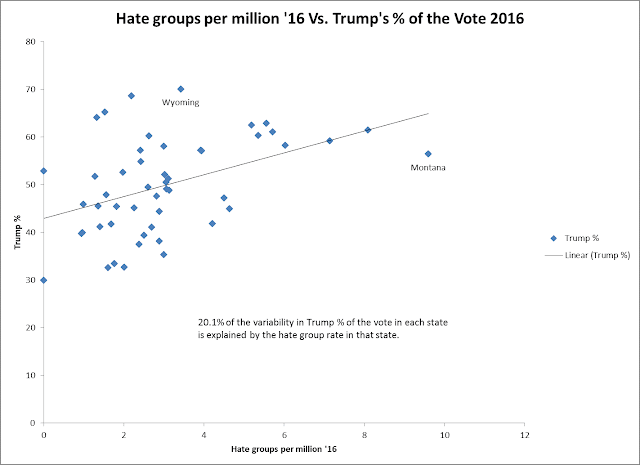 This means that for those states with zero hate groups (Alaska and Hawaii), Trump would expect to have 42.8% of the vote.  For every increase in the hate group concentration by one group per million residents for a state, Trump would expect an additional 2.33% of the vote.  The graph above shows the fit of the regression line created by this equation.  The regression model accounts for 20.1% of the variability in Trump's vote.

Washington, DC was not included in the model because it is an extremely high outlier in hate groups (30.83 groups/million) and hate crime incidents (96.69 incidents/million) and an extremely low outlier in Trump's % of the vote (4.1%).  DC also has the highest population density of any state/territory in the electoral college.  For these reasons plus the fact that DC is technically not a state, it was excluded from the model.  The District would make an interesting area for social science research.

I have received comments on Facebook that I implied that the concentration of hate groups in each state caused voters in that state to vote for him.  I will state that prediction does not mean causation.  A significant correlation or regression means that an increase in the one or more predictor variables considered coincides with a change in the outcome variable.  There is always a potential third variable that was not considered that can explain the change in both variables.  These include poverty and education.  I will consider these variables in my next post.


A Wave of Hate Groups in California? No in Washington, DC

Posted by CSI without Dead Bodies at 4:37:00 PM No comments: