When I posted last week on the correlation between the population hate group numbers and Trump's % of the vote, one friend on Facebook asked whether the result would hold up if third variables such as poverty and education were added to the model.  The figure below shows the association from last week,  I thought I would take a look at what would happen if I added educational attainment in each state (defined as the % of the population with a bachelor's degree or higher) and % of the states population in poverty were added to the regression model.  This is done to see whether these variables can account for the relationship between hate groups and Trump's % of the vote. 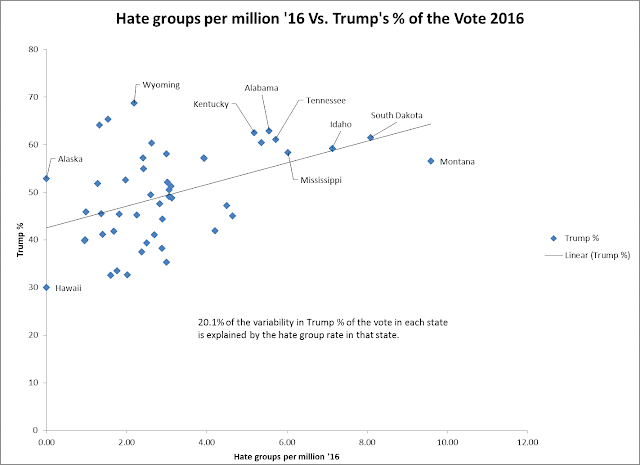 When poverty and education are both added to the model with hate group rate as predictors and Trump's % of the vote as an outcome, the rate of hate groups is still a significant predictor of Trump's vote.  However because the % of poverty in a state and the corresponding % of the state's population with a bachelor's degree or more are highly correlated with each other, the regression coefficients became nonsensical so the other two predictor variables must be considered in the presence of the hate group rate in separate models.  This problem is called multicollinearity by statisticians. 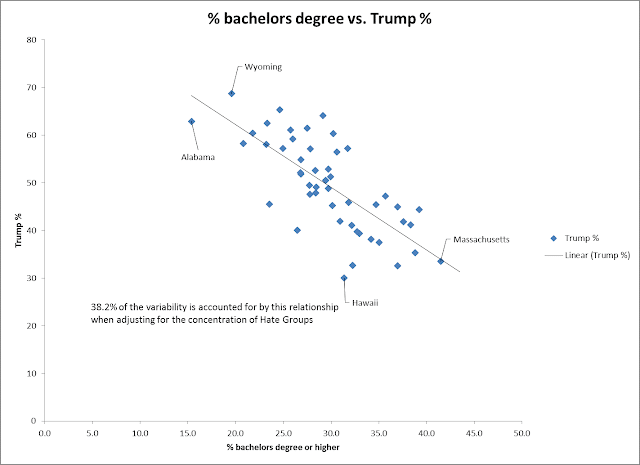 When education is added to the model with hate groups as a predictor, both variables are statistically significant with 58.2% of the total variability in Trump's vote accounted for.  The model with hate groups only as a predictor accounted for 20.1% of the variability which means that the % achieving a bachelors degree or higher in the state accounts for an additional 38.1%.  This means that educational attainment is a stronger effect than the concentration of hate groups.  The fact that the concentration of hate groups is still significant when education is added means that we can rule out education as an alternative explanation.  The regression equation is:

This means that a state with 0 hate groups and 0 individuals with a bachelors degree would have an estimated 81.9% of the vote for Trump.  With every increase of one hate group per million in the state, Trump's % of the vote should increase by 1.32%.  With every 1% increase in the state's population having a bachelors degree or higher, Trumps % of the vote should decrease by 1.22% in that state.  The graph above shows the strength of the relationship between education and Trump's vote. 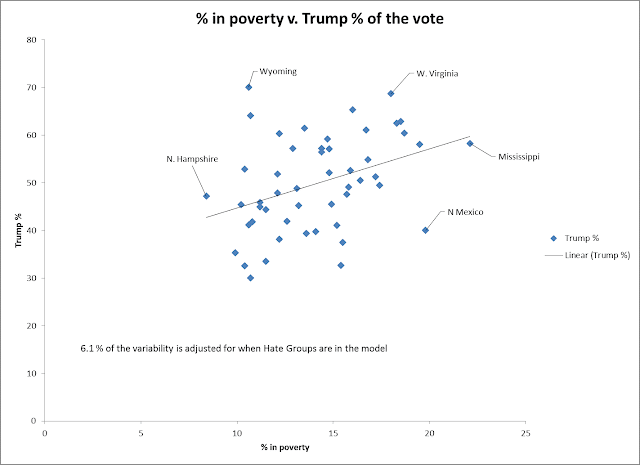 When the % in poverty in each state is added, both predictor variables are significant but the contribution of poverty is weaker than it is with education.  A total 26.2 of the variability is explained by both variables in the model.  This means that an additional 6.1% of the variability was accounted for with the regression equation as:

These models make it possible to rule out poverty and educational attainment as potential confounding variables in stating that the concentration of hate groups in each state predict Donald Trump's % of the vote in that state.  If hate group concentration became non-significant in the presence of either education poverty or both we could rule it out as a predictive factor but that did not happen.  I did test for the possibility of an interaction between the variables (The effect of both increasing at the same time) but did find a significant effect.
Prediction does not necessarily mean that a cause and effect relationship exists between predictor and outcome.  It means that one is more likely to find a higher % of the vote in states with a higher concentration of hate groups.  If I meant to say that a cause and effect relationship existed I would use the word cause instead of predict.  It could be that the sentiments that cause hate groups to form also motivated individuals to vote for Trump.  A lack of education and poverty can fuel these sentiments.  A lack of education was sited as the primary factor associated with white voters voting for Trump.

As with the previous posts the District of Columbia was an extreme outlier as can be seen in the data table below.  It has an extremely high concentration of hate groups, a high % in poverty, a high % with a bachelors degree or more, and a low % of the vote for Trump.  For these reasons and that it is fundamentally different from the other states it was excluded from the analysis.

Posted by CSI without Dead Bodies at 2:32:00 PM No comments: