The Census bureau just released it's annual Small Area Health Insurance Estimates (SAHIE) for every state and county in the US in 2015. With all of the discussion of repealing and replacing the Affordable Care Act I thought I would take a look at how the state level uninsured rates correlated with the % of the vote that Trump received in 2016.  The graph below shows a statistically significant positive relationship with 23% of the variability accounted for by this relationship.  If 100% of the variability were accounted for, all of the states would form a perfect straight line sloping upward like the red dots on the graph below.  The red dote represent the predicted values for the regression equation:

This equation states that a state with 0% uninsured (which doesn't exist) Trump would receive 36.1% of the vote with every 1% increase in the uninsured rate giving him an increase of 1.34% of the vote.  This univariate model predicted the % of the vote of some states better than others.  For the next step I took a look at whether this relationship would hold up if I added % uninsured to the model I created for hate group rates and Trump's % of the vote. 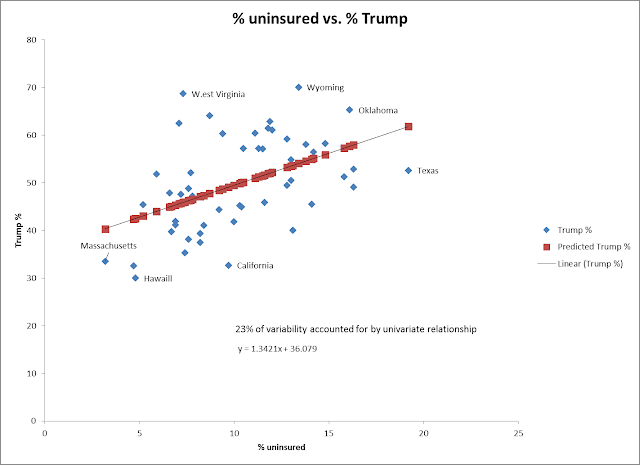 When I added the % uninsured to the model, I thought took a look at how it would perform in a model with hate group rate, % in poverty, and % with a bachelor's degree or higher.  The full model gives the following estimates. 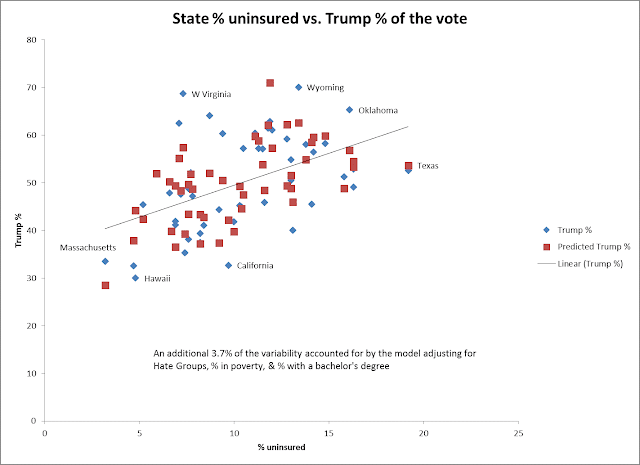 Ridge regression is a biased regression method with a penalty term lambda which shrinks the variability of the estimates.  In an iterative process a value of 40 was chosen for lambda.  This method provided the following estimates for the regression slopes.

Below is the raw data used in this analysis.

Posted by CSI without Dead Bodies at 5:52:00 PM No comments: