I know it's been a while since I've posted last.  I've been busy with running for city council and other personal issues.  In my last big data post, I looked at county level simple correlations with education, uninsured, child abuse, and Trump's % of the vote.  This post will look at multiple regression for county level variables.  This is to sort out which effects are strongest when adjusting for the the others.

When adding the variables education (defined as % of population with a bachelor's degree or higher), % uninsured, and % change in child abuse cases with Trump % of the vote gives the following model with Philadelphia County included in the data set.  The coefficients are the values for the regression equation:


The scatterplot below shows the actual values for each county (in blue) and the predicted values (in orange) for the above equation.  For example, Forest county had an actual % of the vote for Trump of 70.1% but the model predicts 79.3% for Trump with a predictor value of 8.3% uninsured and 8.5% with a bachelors degree or higher. 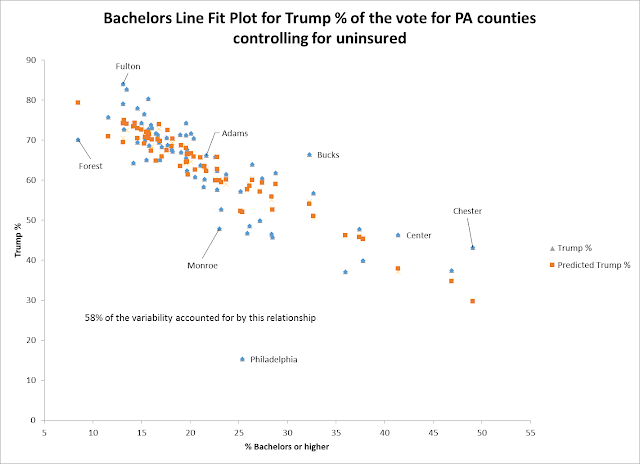 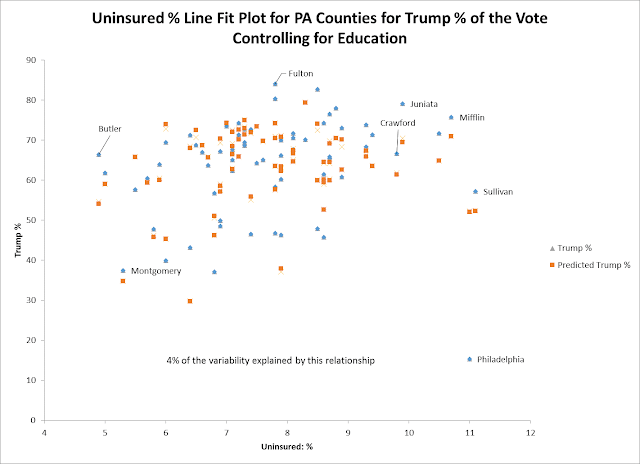 Philadelphia county is an outlier for the counties in Pennsylvania in much the same way as Washington, DC is for the other states. It had a big influence on the uninsured data so it was included in this model.  Both Philadelphia and DC are demographically different from the surrounding counties and states respectively.  The % of the white population in the counties and the states may be an important explanatory variable for the model.

Posted by CSI without Dead Bodies at 6:07:00 PM No comments: