Last week I met with two filmmakers who were doing a documentary film on faith and the economy in the Johnstown area.  I was telling them about my blog and my regression model that predicted 78.5% of the variability in Trump's vote in the 50 states plus the District of Columbia with the predictor variables % uninsured, % of the population with a bachelor's degree or higher, and % of the states population that is white.  They asked me what % of the states' religiosity predicted in Trump's vote.  It seemed like a worthwhile variable to add to the model.

First I had to see what state level measures of religiosity were available publicly.  I saw the Pew Research Center came out with a measure of the % of individuals who were highly religious in their state.  The measure is a composite of four variables.


The map below shows the states with increasing darkness of blue showing increased religious fervor.  Not surprisingly the states in the deep south show the most fervor. 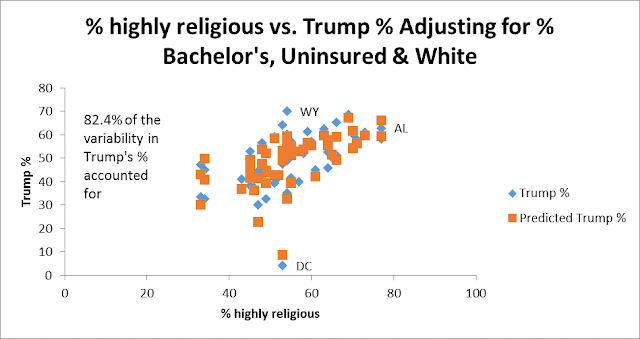 The graph above shows the association between the % religious and Trump's % of the vote. The predicted values for each state are close to the actual values except for Wyoming which had a high % of the vote for Trump despite having the same % religious as DC.  If the model accounted for 100% of the variability all of the predicted values would be right on top of the actual for each state.

Posted by CSI without Dead Bodies at 9:58:00 PM No comments: