The Southern Poverty Law Center has come out with it's annual census of hate groups which shows .  Last week I wrote extensively on the national hate group numbers at The Hill Talk.  This week I will l look at a new way of measuring the reach of these groups. 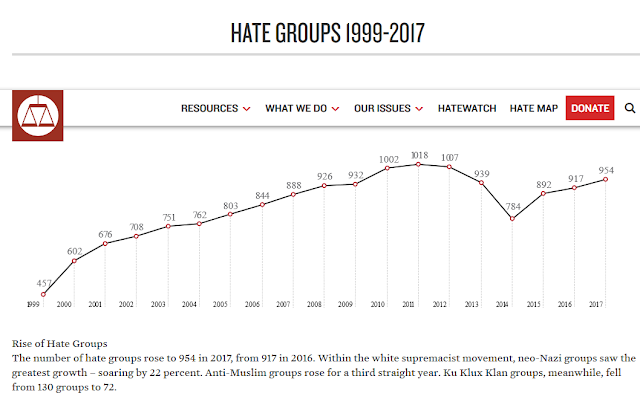 The hate map for Pennssylvania (my home state) for 2017 showed a decrease in the number of groups from 40 in 2016 to 36.  The most common ideology was black nationalist groups like the Nation of Islam.  If one were to group the neo Nazi, KKK, racist skinhead, and white nationalist groups together they would total 19. Twelve of these groups had a statewide presence (meaning they have more than one chapter in the state or meet in more than one location there) including ten of the groups in the aforementioned categories.  These statewide groups are clustered in the center of the map below.  Ten of the 36 groups have their headquarters in the state.

It would seem that a group with a statewide presence would have a larger reach in the community than a group with a local presence.  I counted the number of groups with a statewide presence in each state and gave them double the weight than groups with a local presence. For example Montana had eight total groups and 3 statewide in 2017.  The number 3 would be multiplied by two and added to the 5 local groups for a reach total of 11.  The numbers for each state are summarized at the bottom of the post.  The reach numbers were adjusted for population just as the hate group numbers were.  These rates were correlated with the raw hate group rates, hate crime rates, and Trump's % of the vote which was previously found to be correlated with hate group rates.

Because DC was an extreme outlier in the hate group and hate crime rates the correlation coefficients were computed both with and without it.  Because DC is so small, all of the hate groups could be considered statewide.  This wasn't done as DC is technically not a state and is fundamentally different from the others.

Posted by CSI without Dead Bodies at 5:18:00 PM No comments: