In the press conference following the horrific shootings at the Tree of Life Synagogue which climed 11 lives, Wendell Hissrich, Pittsburgh's director of public safety, said "these events usually occur in other cities, today the nightmare has hit home in the city of Pittsburgh."  The video clip above details six other mass shooting events (defined as events with three or more fatailities) in and around the city that have occurred sine 2000.  These events include Ronald Taylor and Richard Baumhammers racially motivated shooting sprees, Richard Poplawski's killing of three Pittsburgh Police officers a mile from where I lived in Stanton Heights, George Sodini who killed three women at the LA Fitness Center in the South Hills, a drug related shooting in Wilkinsburg and a car wash shooting in Fayette County. 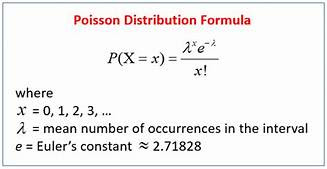 To test this claim I can compare the number of shootings here in Pittsburgh for time and population to the national rate of mass shootings since 2000 adjusting for population and time.  The Poisson distribution is a probability distribution used to estimate the probability of rare events,  In the above graphic x is the number of events of interest, lambda is the mean # of occurrences say the national rate of shootings and x! (called x factorial) is a shorthand way of writing 5! = 5*4*3*2*1 = 120.

Mother Jones magazine maintains an online database of mass shootings related to mass shooters whose motives were not gang related and did not occur in a home.  They list 75 such incidents in their database since 2000.  The shootings by Baumhammers, Sodini, and Taylor were not included but should have been by their criteria so I will include them in the total number of incidents making it 78.  The shooting by Poplawski is not included because it occurred in his home and the other which happened in Wilkinsburg is also not included because it is drug/gang related.  Dividing by the US population in the 2010 census of 308,745,538.  Population adjusted rate of these mass shootings in 0.25 shootings per million residents for lambda in the above equation.  Entering the 5 incidents into the formula for x gives a probability value approaching zero for observing this rate given the national rate.

If one adjusts the observed incidents for the population of the three counties in which they occurred (1,557,774 from the 2010 census) we find a rate of 3.19 incidents per million which is considerably higher than the national rate 0.25 incidents/million.  If we enter this number into the formula (rounded down to three to make it an integer) we find a probability value of 0.00203 for having exactly three mass shootings here over the period 2000-2018.  The cumulative probability of observing 3 or more shooting per million given the national rate is 0.00216.


If we consider the number of fatalities in last Saturdays shooting, Hissrich is right that the attacks represent a new level of violence here similar to Parkland, or Columbine.  Looking at the number of past mass shootings in the context of the population it looks as though they are more common here than in other parts of the country (though it is not the only hotspot for them as can be seen in the map above).  If drug/gang and domestic violence related shootings are included the numbers would look more horrific for local and the national map.

Posted by CSI without Dead Bodies at 4:22:00 PM No comments: 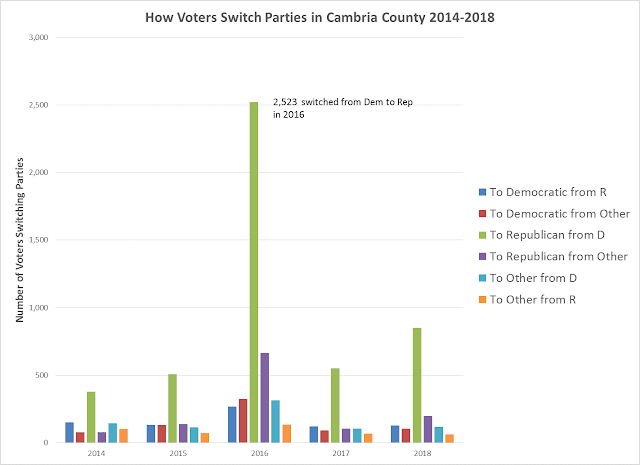 Last week I looked at gross changes in the voter registration rolls in Cambria County.  This week I'm looking at how many of these changes were due to pepole switching parties. The Department of State provides these numbers for 2018.  The graph above shows the number of voters who have switched from 2014-2018.

The light green bar shows the number of Democrats switching to Republican for each year.  The largest increaseby far was in 2016 with 2,523 switching.  In the same year an additional 665 switched their registration from other to Republican.  The total gain in GOP registration from 2014-2016 was 5,281.  The number switching in 2016 accounted for 60.4% of this gain.  In 2018 the gain for Republicans was 505 but the number switching to Republicans was 848 from Democrats and 198 from others.  This suggests that the number of new registrants are not picking the GOP and other voters are now either inactive or have left the area.

PA Election 2018: Will Facebook and Twitter Followings Predict Winners?
Posted by CSI without Dead Bodies at 10:41:00 AM No comments: