I have been tracking the number of cases of Coronavirus In Cambria County and in the State of Pennsylvania and the US since the first case was reported on March 22.  For this post I thought I would take a closer look at testing rates in the six zip codes that cover greater Johnstown which are seen in the map above.
The state department of health provides case level data at the zip code level at the map here.  For zip codes with less than five positive cases, the number of these cases is redacted while the number of negative tests (if greater than five) is reported.  This is done to protect the privacy of the individuals with the disease. Each zip code in Johnstown (15901,15902, 15904, 15905, 15906, and 15909) has between one and four cases. To estimate the total number tested, I added two to each of the six zip codes negative cases.  For example, the zip code 15901 has 114 negative cases as of this writing.  Because 15901 has between one and four cases, I conservatively added two to the total to estimate the total tested for a total of 116. 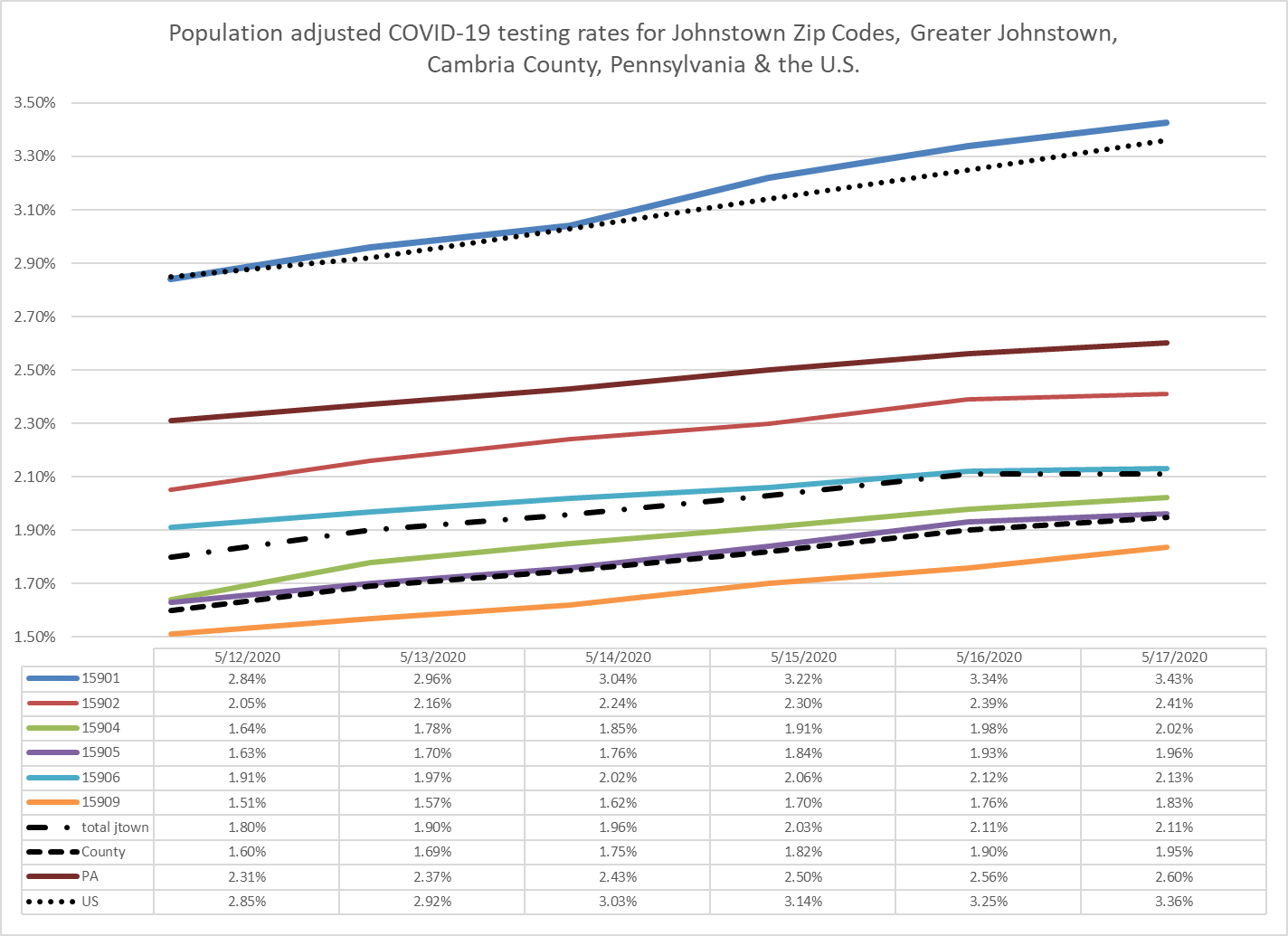 The above graph/table has the testing rates for each zip code plus the total for Johnstown, Cambria County, Pennsylvania and the U.S for the last six days.  The rate is computed by dividing the estimated number tested by the population in each zip code (found from zip codes.com).  I realize that  this is a noisy graph.  I added the table beneath it to show which is which.
The two lines that jump out at me the most are the ones for zip code 15901 which is downtown Johnstown (the only zip code completely within city climits) and for the US rate as a whole (the US number tested is taken from Johns-Hopkins COVID-19 map).  This line shows that the testing rate is slightly higher for this zip code (3.43%) than the U.S. (3.36%).  The other five zip codes are below the state rate (solid black line).  Only zip code 15909 (orange line) is below the county rate dotted black line.
The county rate is below the overall rate for the Johnstown zip codes.  These zip codes have more than half of the county's total population.  This suggests that there is a lack of access to testing in the more rural parts of the county.  The only place to get testing in the county is at Conemaugh hospitals facility on Scalp Avenue in zip code 15904 and can only be done with their doctors order. In the northern parts of the county, they may have to travel to Altoona, Clearfield or Indiana for testing.
The relatively high testing rates for zip code 15901 can be explained by the low population there (3,384) and by the fact there are many senior citizen facilities there such as the Vine St Towers.  Still none of these testing rates are cause for celebration as asymptomatic carriers of the virus are the most dangerous for its spread.
**Related Posts**

Posted by CSI without Dead Bodies at 6:27:00 PM No comments: