How Many Active COVID-19 Cases are in Cambria County?

Subtracting the 404 from the 498 gives 94 active cases under this formula. 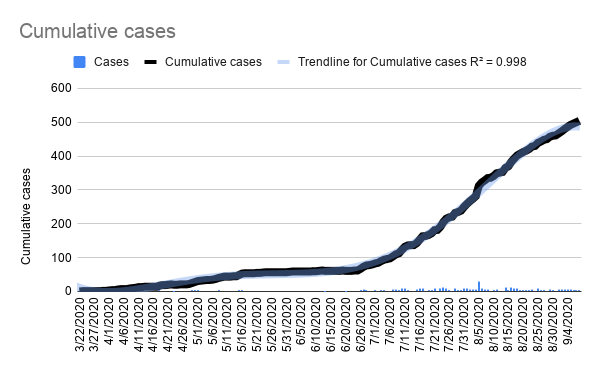 The 81% number is determined this way according to the state website:

"Individuals who have recovered is determined using a calculation, similar to what is being done by several other states. If a case has not been reported as a death, and it is more than 30 days past the date of their first positive test (or onset of symptoms) then an individual is considered recovered."

The health department does not have access to The graph above and the table below shows that in the last 30 days (from 8/10/2020 to today 9/8/2020) the total number of cases increased from 341 to 504.  There were three total deaths in the county at the beginning of this period and six at the end.  Subtracting the three deaths up to this date from the total gives an estimate of 338 recovered or 67% of the total cases.  If we subtract the estimated number  recovered from the total living cases (498) gives an estimated number of 160 active cases.  Of these active cases, two are on a ventilator and eight are hospitalized.

On lighter note I have been informed that my book will be available from the printing press on September 14.
**Related Posts**

Posted by CSI without Dead Bodies at 7:07:00 PM No comments: