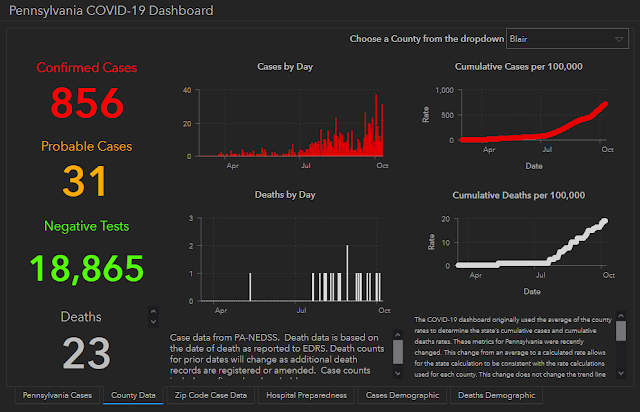 I have written extensively about the surge in corona virus cases in Cambria County.  Recently there has been a surge in cases and deaths in in Blair County as can be seen in the image above (22 since July 21).  Centre County has seen a larger surge in cases since the Penn State students have come back but has had only four deaths since July 21.
Looking at the numbers for Blair County more in depth, there are 887 total cases (31 probable +856 confirmed) and 18,865 total negative results.  This gives a total of 19,752 total tests and a positive rate of 4.49%.  The case rate of 728.07 per 100,000 ranks 39th in the state out of 67 counties.
The county's case mortality rate of 2.59% ranks 38th in the state.  The mortality rate of 18.88 deaths per 100,000 ranks 36th in the state.
One hundred fifty three of the 887 cases are in a nursing home (17.2% of the total) in 13 facilities.  One hundred and ten of these nursing home cases are residents and 43 are staff members.  Thirteen of the 23 deaths or 56.5% of the total are in nursing homes.  By comparison, 10.49% of Cambria County's cases are in a nursing home and no deaths have been reported there.
The PA Department of Health reports that 8 cases are hospitalized and 4 are on ventilators.  The hospitalization rate is 6.57 per 100,00 ranking 16th in the state.  The ventilator rate is 3.28 per 100,000 and ranks third in the state.
The high rate of hospitalization, nursing home cases and deaths, and ventilator use relative to the number of cases in Blair County suggests a greater severity of these cases.  Without access to contact tracing data, it's hard to say why this is the case.
**Related Posts**

A Comparison of State Mortality Rates: Pennsylvania is 6th Highest, Michigan is Highest