I'm back to posting about the coronavirus.  At the beginning of November, I posted on how mortality was surging in Blair and Westmoreland Counties which are to the west and east of Cambria County respectively.  While deaths a still rising in those counties, Cambria County has eclipsed them both since Trump came here on October 13. 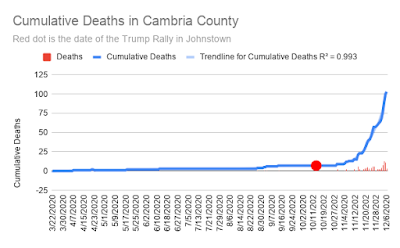 Before October 13 there were 7 total deaths in the county.  On October 13 Trump came to the Johnstown area airport to campaign for his reelection.  The red dot on the blue line in the chart shows the date of the rally. 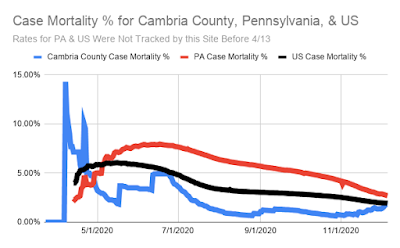 The first reported deaths after the rally were on October 28th.  The cumulative case mortality (the number of deaths has increased from 0.64% on the 28th to 1.80% today.  This is an indication that deaths have risen faster than the cases.  The graph shows that the case mortality rates for Pennsylvania and the US have decreased over the same period.  The decrease was from 2.58% to 1.93% for the U.S. and from 4.34% to 2.70% for Pennsylvania.  For the U.S. and the state, the number of deaths has not risen faster than the number of cases. 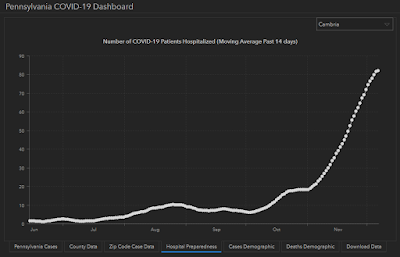 This graph from the state Department of Health's shows the increase in the number of cases hospitalized in the county.  The large bend in the curve occurred on October 30 when there were 18 cases hospitalized and has increased exponentially ever since to 86 cases today. 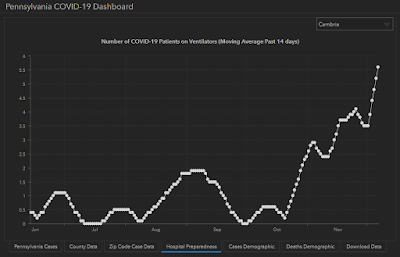 Cases have likewise increased in the county in nursing homes (or long term care facilities), in the county jail and in the federal prison in Loretto, PA.  There 97 cases in nursing homes on Oct. 30.  Currently there are 643 in 28 facilities with 38 reported deaths or 37% of the total deaths.  At the federal prison in Loretto, there were 8 active cases on Oct 30.  Currently there are 189.  I have no daily numbers at the county jail in Ebensburg.

Contact tracing is needed to definitively establish a link between the Trump rally and the rise in cases and deaths in Cambria County.  However it is hard to disprove a link between the two events.  A week after the election the county republican party chartered a bus to the million MAGA march in Washington DC.  Just what we needed, another super spreader event where people can bring back the virus to their communities.  It has been shown that counties that voted heavily for Trump have the worst virus surges. 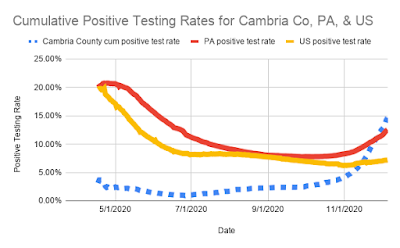 WJAC now reports that Cambria County now has the third highest positive test rate in the U.S.  I have the cumulative rate at 14.65% which is higher than the state rate which is 12.54% and the U.S. rate which is at  7.21%.  A rising positive rate suggests that there are more cases to find than are being tested for.  The news report can be seen here.

How Many Active COVID-19 Cases are in Cambria County?

Posted by CSI without Dead Bodies at 9:07:00 PM No comments: