A Look at Vaccinations in Pennsylvania: Montour County has a high Vaccination and Hospitalization Rate

With the COVID-19 vaccine rollout the state now provides data for full and partial vaccinations at the county level.  I have looked at the rates of full vaccinations (the number of individuals who received both shots).  After adjusting the numbers for population, Montour County had by far the highest rate of full vaccinations at 2,710 per 100,000 followed by Crawford County at 1,253/100,000 and Union County at 653/100,000.  I looked at the correlations of the vaccination rates with the other rates in the statewide table that I put together for each of the 67 counties in Pennsylvania. 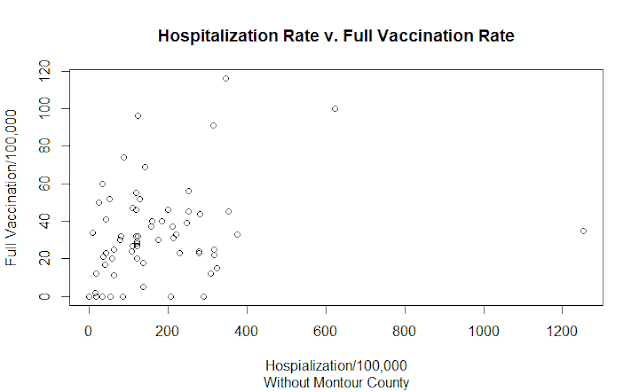 Earlier this year I posted on how Montour County was an outlier on the testing rate in the state.  Currently it ranks second in the testing rate at 57.32% behind Union County at 57.64%.  Montour County is also first in the state in the rate of cases on a ventilator at at 104/100,000.  By comparison the county with the second highest ventilator rate is Crawford County at 16.5/100,000.  Right now it seems that a high rate of hospitalizations and ventilator use is what is driving the allocation of vaccinations in the state.