*Pennsylvania life expectancy by race numbers are from 2010 (Measure of America, 2013)

In my book, Wuthering Depths in Johnstown: By the Numbers.  I wrote extensively on the 2020 County Health Rankings for Cambria County (where Johnstown is located).  The number that jumped out at me most was racial disparities in mortality data in Cambria county where African Americans had a life expectancy of 65.6 years, Caucasians 76.2 years, and Hispanics 89.0 years.

Overall the county is 2.6 years behind the US life expectancy.  Caucasians are 2.2 years behind, African Americans are 7.4 years behind, and Hispanics are 9.5 years ahead of the US rate.  Life expectancy is not included in the overall County Health Rankings for Health Outcomes.  Mortality Measured as Years of Potential Life Lost is factored into the rankings which is a measure related to life expectancy. 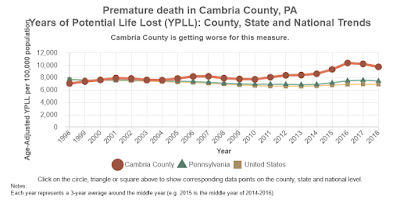 The health factors data for the county provides some clues for this discrepancy.  I will discus it in my next post.

"Wuthering Depths in Johnstown: By the Numbers" Is Now Out and the PPF Medicaid March.