There have been many news reports on Coronavirus surges in the U.S. recently, especially among the unvaccinated in the south.  The graph above shows that Cambria County is experiencing its 5th surge in COVID-19 cases.  The first surge was in the Spring of 2020.  The second was from late July to early August of last year.  The third was after Donald Trump's visits to the area (by Jr and Sr) from October to December and was by far the worst.  The fourth occurred from mid March to mid April of this year.

We are now seeing a 5th surge following super-spreader events such as Thunder in the Valley.  The surge began on July 10 when there was a 7 day new case average of 0.71 cases per day to an average of 10.14 cases per day as of this writing.  The last death in the county was reported on July 1.  There have been 35 straight days with no new reported deaths since then.  The above graph shows that the number of cases hospitalized have decreased to a low of 3 on July 19 but has since risen to 12 as of this writing. As of yet there has been no corresponding increase in the number of cases on a ventilator. 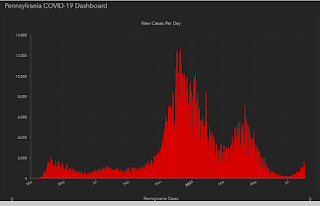 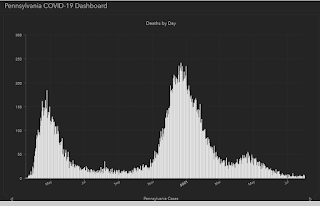 The vaccine rollout being given to the most vulnerable populations first makes it unlikely that the surge in cases and deaths will reach the awful levels seen last fall and winter. The slowing vaccination rate means that smaller surges can happen.  I have no information on how many new cases are due to the delta variant in the county.  The delta variant is not resistant to the vaccines.  The nightmare scenario is that a new variant could evolve that is resistant to the vaccines.  This would put us back to where we started with the pandemic.  Get the shots.

Posted by CSI without Dead Bodies at 9:43:00 PM No comments: