New Hate Group Estimates Are Out for the U.S. 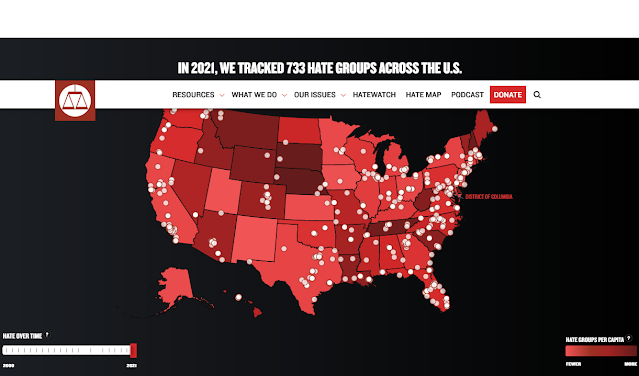 The County Health Rankings number will not be released until April 27.  I do have new numbers from the Southern Poverty Law Center for hate groups for each state in the U.S. The current map is displayed above.  They are currently tracking 733 groups in the U.S.

The graph at the left shows that the number of groups that they are tracking has decreased steadily since 2018 when there was an all time high in the raw number of groups at 1,020 (3.12/million).  Adjusting for population, the all time high year was 2011 at 3.18 groups per million.  These 2 peaks occurred during the first years of the Obama and Trump presidencies.  They did not track the numbers in 2005 and 2006.

The table at the bottom of this post shows the current number of hate groups for each state, their populations, population adjusted numbers, their rank, and 2020 rates.  The District of Columbia has had by far the highest population adjusted rates at 24.65 groups per million residents.  Many would argue that these 17 groups are national headquarters these groups and do not organize locally.  While this is true for 9 of these groups (like the Family Research Council), 8 of them have a local presence.  Adjusting these 8 local groups for population the rate is 11.60 which would still be the highest in the U.S. 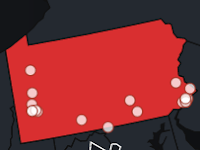 Focusing on Pennsylvania, the number of total groups has declined to 30 from 36 a year ago.  The most they have ever tracked there was 41 in 2013.  Of the current 30 being tracked, 10 of them have a statewide presence.  The local groups are presented in the map at the right.  The population adjusted rate in 2021 was 2.31/million (ranking 30th in the U.S.) down from 2.81 million last year.  The local group nearest to Johnstown is called Evergreen.  It is a white nationalist group located in Bedford, PA.  It may be a group worth investigating.