It has been a week since SCROTUS reversed their Roe vs. Wade decision on abortion and made other revolting decisions on guns, school prayer and the environment to name a few. It has also been about 5 days since former White House aide Cassady Hutchinson gave damning testimony on Trump's role in the Jan 6 attack on the capitol. While there is a paucity of polling during the 4th of July holiday, there is enough to draw some conclusions on election prospects in the 2022 midterms and the 2024 election.

Emerson has come out with a poll on the 2024 GOP nomination for President after the Roe decision and the Hutchinson. It shows Donald Trump in the driver's seat with 55% of the vote followed by Ron DeSantis with 20% and Mike Pence with 9%. A Politico/Morning Consult poll taken after the Roe decision but before the Hutchinson testimony found a similar result with 51% for Trump, 23% for DeSantis and 8% for Pence. The same Emerson poll also showed Trump ahead of Biden 44% to 39% if the election were held today. Both polling organizations used samples of registered voters rather then likely voters. 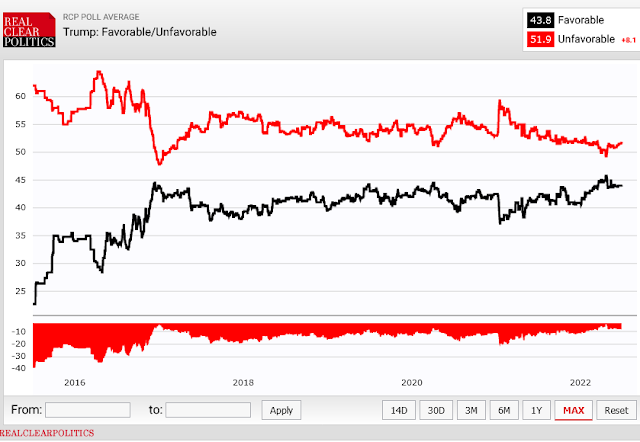 The above graph shows how Real Clear Politics Polling Average of Trump's favorability ratings have changed since he announced his run for President in 2015. His ratings did drop from 42.5% on Jan 6 to 37.2% on Jan 18. They have risen more or less steadily since then to a post presidency high of 45.8% on April 24 of this year. Since the hearings began and the Roe reversal happened his favorability ratings have declined by 2% to 43.8% as of June 29th, 3 days after Hutchinson's testimony. 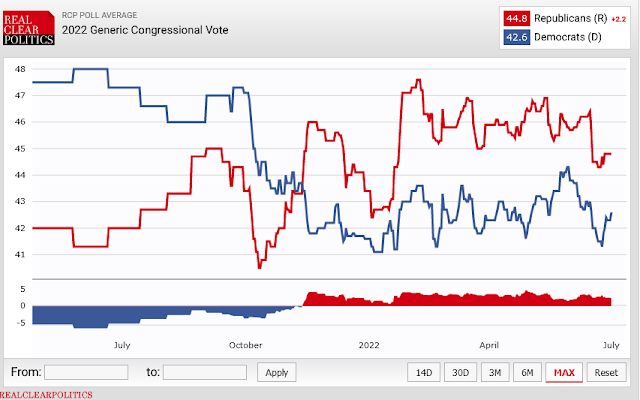 Above is the Real Clear Politics Polling Average for the Generic Congressional vote. It shows that the Democrats had the advantage before November of last year and the GOP took over. Since then the GOPs advantage over the Dems peaked at 4.7% on April 29. It decreased to an advantage of 1.9% on May 29th. After the Jan 6th hearings began on June 10, the numbers for both parties declined with the gap between them increasing to only 2.8% on June 22. After the Roe reversal and Hutchinson's testimony, the gap between the parties shrunk to 2.2%.

The generic congressional vote is a crude measure of how the Congressional and Senate races will go. In 2020, the Democrats had a 6.8% advantage in the polling average but only received 3.1% more votes than the GOP. Of course gerrymandering can be a confounding variable. Nate Silver's Five Thirty Eight gives the GOP an 87% chance of taking control of the House and a 53% chance of taking the Senate. They also predict that the leading Republican on the Jan 6 committee, Liz Cheyney, will lose to her primary challenger in August. 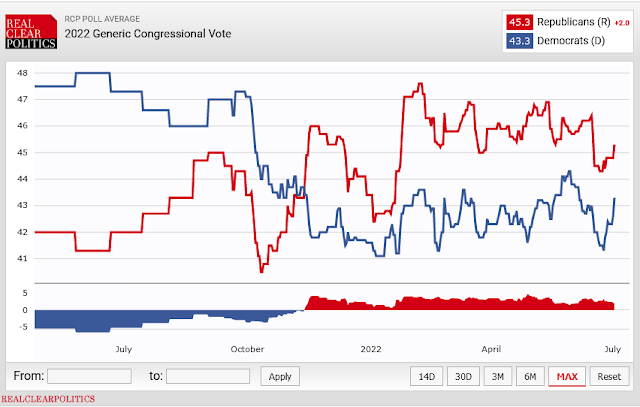 A new poll Generic Congressional Poll From Harvard has come out showing Democrats and Republicans tied at 50% each. This brings the Real Clear Politics average down to 2.0%. Trump's favorability rating in this poll is 42% bringing this RCP average down to 43.6%. This poll also shows Trump in the drivers seat for the 2024 nomination with 56% compared to DeSantis with 16% and Pence with 7%. Is this the start of a trend? Stay tuned.

Posted by CSI without Dead Bodies at 9:44:00 PM No comments: