ADHD an Invention of Big Pharma? 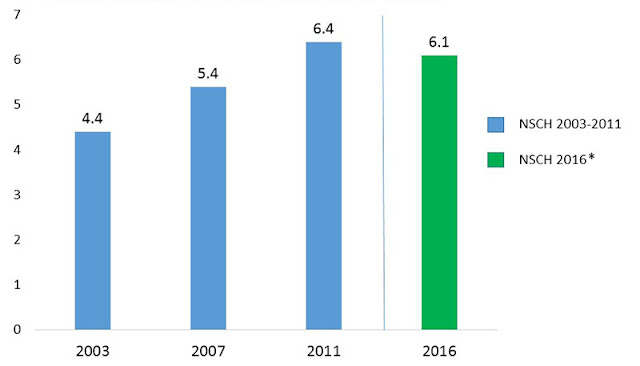 Looking through my Facebook feed I came across a post of an article from Health Magazine that Attention Deficit Hyperactivity Disorder (ADHD) is a made up disorder by big pharma to push drugs to children.  The article cites another article by a Joe Jarvis in The Daily Bell that claims to prove that ADHD is fake.

The Jarvis article cites government statistics stating that Arkansas and Kentucky are the states with the highest rates of ADHD diagnosis.  In these states a high percentage of kids age 6-15 (over 85%) fish and hunt (over 30%).  He compares these numbers to those in New Jersey and Nevada which have the lowest ADHD rates in the US.  In these states only 44% of kids these ages fish (it does not state how many children hunt there).  Jarvis holds this up as proof that ADHD does not exist as fishing and hunting require a high degree of focus to be successful.

This blog uses correlational data at the state level all the time to show relationships between variables that show meaningful patterns.  I am very careful not to state that it conclusively proves or disproves anything the existence of a disease.  Even further I would not limit my analysis to four states to make such a claim.

There is centuries worth of research backing up the existence of ADHD.  The diagnosis of it is still not an exact science with it being based on behavioral observation and neuropsychological test data.  Genetic abnormalities have been found which are associated with the presence of the disease.  Someday genetic testing and brain scans will be able to provide a more definitive diagnosis but we're not there yet.  ADHD children and adults can exhibit a trait called overfocusing and not all are hyperactive.

Posted by CSI without Dead Bodies at 1:43:00 PM No comments:

Get the Lead Out

A new survey by the Centers for disease control or CDC suggests that about 500,000 children in the US have low blood lead levels (defined as 5 micrograms per deciliter) from 2007-2010.  This shows an 8.6% decrease compared to the last survey period in 1999-2002.  The graph at the left shows that there are higher percentages among african americans, the poor, and those who live in housing built before 1950.

Many buildings built before 1950 still have paint that is lead based and have plumbing with lead pipes.  These paints were phased out but it is very expensive to replace and it is better in the long run just to build new housing to replace the paint.  The paint can flake off and when ingested by children can cause intellectual or developmental disabilities (the now politically correct term for mental retardation) and or learning disabilities.

In the lab (on animal studies) and in correlational studies no dosage level of lead has been found that is completely benign on the brain.  It has a negative effect on the blood brain barrier which protects it from other toxins and has many other negative effects on intelligence test scores and brain function.

The negative effects of lead exposure were recognized by Greek physicians as early as the 2nd century BC.  There is a theory that it contributed to the decline of the Roman Empire though that is controversial.   It was used heavily in the industrial revolution and in gasoline in the 1920s.  A way to test the theory would be to measure residual lead levels in the remains (teeth, bones, and if lucky hair) of the Roman citizens relative to those in the surrounding Barbarian tribes which sacked the empire from AD 410-476.  If the levels were higher in the Roman citizens it would support the theory.

It was phased out starting in 1978 in the US but the effects are still felt with leaded gasoline getting into the atmosphere through auto emissions, then into rain water, and finally the soil where it can remain for many years.  Other countries do not have as strict regulation on lead as the US does now.


Episode 7 of Cosmos is devoted to lead poisoning and it's history with scientist Clair Patterson being voiced by Richard Gere. I can only embed the whole episode here while Hulu makes it available.

The conventional view of Attention Deficit Hyperactivity Disorder has been to be caused by heredity, brain injury, or other birth exposures (see the CDC's fact page on ADHD for a full list and a description of the disorder).  Canadian physician Gabor Mate argues that it and a variety of other mental problems in childhood and adolescence is primarily caused by modern stressors placed on children as their brains develop. The primary thrust of his argument is given in the clip below on Democracy Now.

His view on ADHD is not the best known view which may or may not be the case in the future as prevailing views in science ebb and flow.  I asked the local director of CHADD (Children and Adults with Attention Deficit Disorder) first if she'd heard of Dr. Mate and what her reaction to his views were.  She said she was not and that her group favored the hereditary hypothesis and did not like to blame parents or society.  They prefer to build people up not tear people down.

Individuals who grew up in a chaotic household may find Dr. Mate's theories appealing.  He uses case studies and personal information from his life in his book Scattered: How ATTENTION DEFICIT DISORDER ORIGINATES and What You Can Do About It as a Jewish child in WWII Hungary and sites other studies to support his argument without going into their methodology,  A genetic link to ADHD has been established and, given this link, often parental stress can be found even in societies without these modern stressors.  Also modern societies have better tools to detect behavioral problems like ADHD which would explain the increased rate of diagnosis.  Finally as is the case on my post on autism (see Cause & Effect, Slip Slidin' Away ) it is difficult to do experiments on this disorder as it is unethical to do on people and there is no good animal model yet for ADHD.

For a more conventional explanation of the prevailing scientific view of ADHD from the documentary ADD & Loving It you can see the video in the link below.  Dr. Mate doesn't directly blame the parents but societal pressures that are put on the parents.

Where Are We in Understanding?