My Book is at the Printing Press 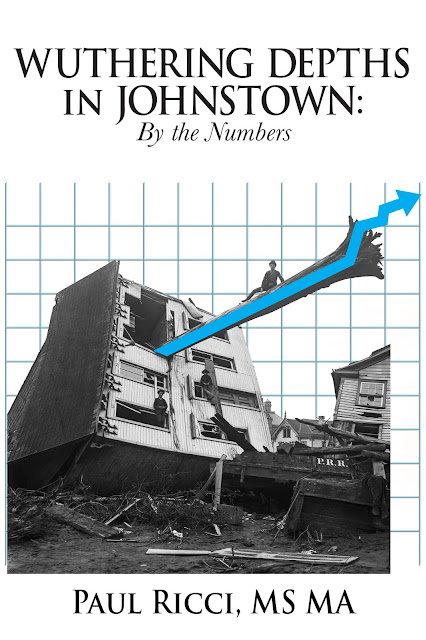 After a year and a half of writing my book, Wuthering Depths in Johnstown: By the Numbers, has now gone to press and a release date will be set soon.  The book is being self published through the Somerset Daily American (Jeff Bezos has enough money).  Details to come.

It is a profile of the city of Johnstown as told by the numbers that are publicly available.  Some of it began with posts from this blog that relate to the city of Johnstown (some of which are in the related posts below).  The rest of it came from my sources such as the census bureau and other government sources and from other research projects.  Its release should come close to the tenth anniversary of this blog which is next month.  Further details to come.

Thanks to Eric Luden for the cover and back cover art, to The Johnstown Area Heritage Association, and to Nicholas Brisini, Michael Giazzoni, Jessica Maniccia Smith, and Lloyd Stires for their advice on editing.

Johnstown, PA has Been Crawling with Documentary Filmmakers 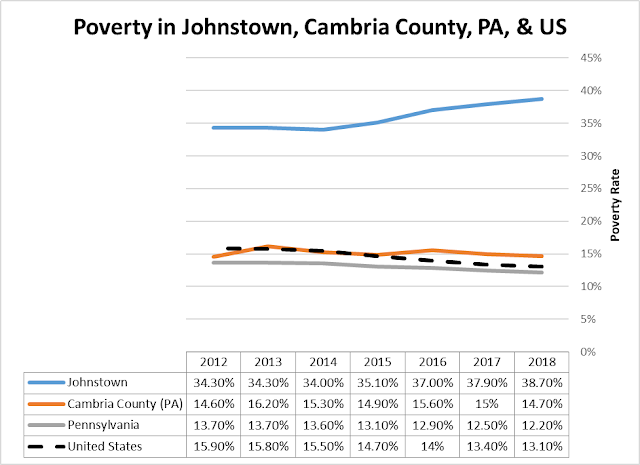 In addition to the school district estimates that I posted about two weeks ago the Census bureau has produced estimates for every county and municipality in the US just in time for the holidays.  For Johnstown the poverty rate increased to 38.7% while it decreased slightly for Cambria County, Pennsylvania and the US. This is according to the federal definition of poverty which is about $30,000 for a family of four. 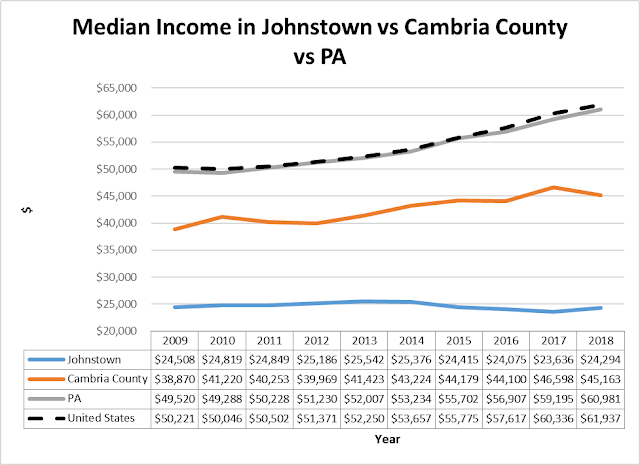 The census bureau also produced median household income estimates for the same counties and municipalities in the US for 2018.  For Johnstown there was a slight increase of $658 in the median income which is still well below the county, state, and US medians. This increase was within the $1,770 margin of error so we must conclude that there is really negligible change in the median income.

The median for Cambria County did decrease in 2018 by $844 in 2018 while the state and US medians increased by $1,786 and $1,601 respectively.  The PA and US increases were outside their margins of error while Johnstown's and Cambria's were not.

On Christmas Eve PBS Frontline rebroadcast a documentary on the effect of poverty on children in the US.  It's not just a Johnstown problem.  Unfortunately they do not allow me to embed it here but you can watch it at the link here.  Merry Christmas to all.

Posted by CSI without Dead Bodies at 2:55:00 PM No comments: 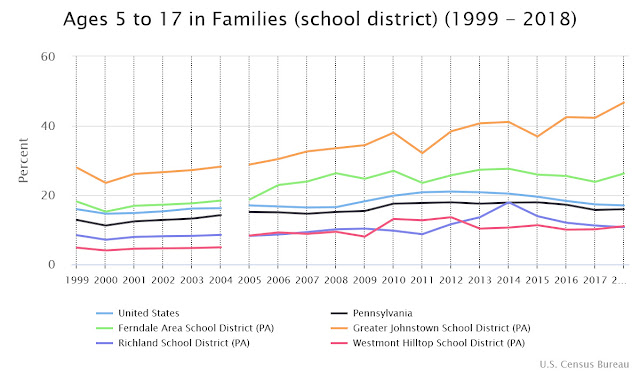 The Census Bureau has come out with its annual Small Income and Poverty Estimates for each county and school District in the US for 2018.  The above graph shows the 20 year trend in estimates of the percentage of students in poverty for the US, Pennsylvania, Greater Johnstown (GJSD), Ferndale, Richland, and Westmont school districts.  These districts are chosen as they are adjacent to GJSD.  The top 10 school districts in terms of poverty rate in Pennsylvania are listed below.

Greater Johnstown once again has the highest poverty rate for children ages 5-17 in the state out of 500 school districts at 46.7%.  Nationally it ranks 84th out of 13,207 school districts or in the 99th percentile in poverty.  The above graph shows that this trend has been increasing for GJSD.  The rates for the US, Pennsylvania, and the other school districts have remained relatively stable over the last 10 years by comparison.

The Ferndale SD is also above the state (15.9%) and national (17.0%) rates for 2018 at 26.2%.  Richland and Westmont were virtually identical at 10.7% and 11.0% respectively.  Next I will comment on overall poverty trends for Cambria County and the City of Johnstown.  The 2020 census is coming soon and they are looking to hire census takers.  Whether or not you want to work on it you should participate to ensure that they will have the best possible estimates of the US, state and local populations.

Posted by CSI without Dead Bodies at 3:30:00 PM No comments:

The new SAIPE (Small Area Income and Poverty Estimates)  are out for the year 2017.  It covers all states, counties, and school districts (for children age 5-17) in the US.  For the US the rate for children 5-17 was an estimated 17.1%.  For the state of Pennsylvania it was 15.7% for this age group. There were 500 school districts in Pennsylvania in 2017.   This post will focus on southern Cambria County (the whole county had 21% poverty for age 5-17).

The Greater Johnstown School District (GJSD) had the highest poverty rate in the state (highlighted in blue in the map above) with 42.3% poverty for ages 5-17.  By contrast the neighboring districts of Westmont (which covered the municipalities of Upper Yoder, Westmont, Southmont, and Elim in the map) had a rate of 10.1%, Ferndale (in 4 green fragments in the southeast corner of the GJSD) had a rate of 23.8%, Richland (covering Richland and Geistown) had a rate of 11.2%) and Conemaugh Valley (covering East Conemaugh) had a rate of 21.3% which is almost exactly at the county rate.  The top ten school districts with the highest poverty percentages are presented in the table below.

Looking at past estimates for GJSD that I have written about in this blog, the poverty rates for ages 5-17 was 40.7% in 2013, 41.1% in 2014, 36.9% in 2015, 42.5% in 2016, and it was 42.32% in 2017.  There is some statistical uncertainty in these estimates, especially for districts with small populations such as Salisbury-Elk Lick SD with 473 children.  GJSD however is still a relatively large district population in this group so we can be reasonably confident in these numbers.  The population of GJSD is larger than the population for Johnstown city (19,643) because it includes surrounding municipalities.

I was going to write about how the Greater Johnstown, PA was the poorest in the state thinking that I would be the first but apparently I have been scooped.  Samuel Stebbins and Michael B. Sauter at MSN.com have produced a list of the poorest towns in each state and Johnstown was it for Pennsylvania.  They state that the median annual income here is $24,075 below the state income of $54,895.  A search of the census bureau's statistical profile for Johnstown shows that the median income is $23,636 for 2017 for Johnstown and $ 56,951 for the state.  The authors did not state the source of their numbers but I assume that they used numbers from the census from some other recent year.  The 2017 numbers suggest an even larger income gap between Johnstown and the rest of the state now than the year Stebbins and Sauter used.
The GJSD has been going through upheaval over nepotism going on in the school board.  This does not mean that the upheaval is what is causing the problems in poverty in the district but it does mean that the focus must be on providing services the the poor students there.
**Related Posts**

2014 Income and Poverty Update for Pennsylvania and Cambria County

Posted by CSI without Dead Bodies at 3:29:00 PM No comments: