'The Secret' Gets the CSI w/o Dead Bodies Treatment

In 2006 Australian author Rhonda Byrne published a self improvement book which became an international best seller followed by a movie.  A friend suggested I read her book called The Secret.  I've had similar suggestions before from friends who want to improve my life who have all meant well.

The book presents a pretty simple law of self improvement called the Law of Attraction which Byrne says has been suppressed for over 3,000 years and is only known by the wealthy 1% and great men throughout history such as "Plato, Newton, Carnegie, Beethoven, Shakespeare, and Einstein."  It says that believing that positive things will happen will make it happen for you with wealth, health, and relationships and believing negative things will happen will make the opposite happen.  It goes on to present that secret in DaVinci Code/Scientology fashion with lots of testimonials and graphics but little hard data to show how the law of attraction always works.  The experts in the film even say that "the anti-war movement creates more war."  Here is trailer for the film.  The author is seen very little in the film.

The book has it's critics such as Barbara Ehrenreich who discusses her own struggle with cancer and how not being positive all the time helps her.  The problem with relying on testimonial evidence alone is that it's always possible to find one contradicting your theory.  The film presents no evidence of how this secret was suppressed all these years.

A closer look at the historical figures presented in the film and book shows that few of then had full happy lives.  The one who comes closest is Plato and that is only because he lived thousands of years ago and we know so little about his relationships and what sort of man he was.  Ludwig van Beethoven had a miserable life with many relationship, money, and health problems.  Isaac Newton was "not a pleasant man" as described by Stephen Hawking (he holds the same professorship that Newton did) who never married and took pleasure in crushing his rivals.  Andrew Carnegie may have been a good husband and father and did lots of charity work but he also ruthlessly crushed the Homestead Steel Strike and was negligent in the Johnstown Flood with crony Henry Clay Frick.  William Shakespeare is another about whom there is little known and some controversy so I will not address.  Albert Einstein like the others did excel at what they were good at but you would not want to be married to him.

There is always a risk of disaster and the chance of success.  You can take steps to minimize the risk and maximize the chance but can never eliminate either.  The passengers and crew on the Titanic had lots of positive energy and optimism but were oblivious to the risks that icebergs posed and we all know how that turned out (see my post Titanic Perspective if you don't for a review of this and Andrew Carnegie's role in the Johnstown Flood). I'm all for having success but at who's expense?  Solutions can be found to the world's porblems but by realistically thinking through the risks and chances.  It gives the secret as the reason for "the richest 1% controlling 96% of the world's wealth" when Ehrenreich and other social critics would give very different reasons.  The Secret has definitely made Rhonda Byrne very wealthy.

Posted by CSI without Dead Bodies at 3:10:00 PM No comments:

Last month Stephen Colbert had Dr. Nasir Ghaemi on his show who wrote a book titled A First Rate Madness leaders saying that America's more successful Presidents such as Lincoln or Franklin Roosevelt have had a predisposition to bipolar disorder (it used to be called manic depression) or depression while most of our less successful one's were more normal like Jimmy Carter, Herbert Hoover, or George HW Bush I.  These mood disorders are genetic according to Ghaemi and other psychiatrists.
Colbert uses the example of Ronald Reagan of someone who was normal and was a successful President and Ghaemi sort of agreed about him being normal but not really about his leadership.  I must point out that Reagan did have an alcoholic father growing up (which can be inherited but Reagan apparently wasn't an alcoholic himself) and his family disagrees about whether he suffered from Alzheimer's while President.  If one looks through other leader's backgrounds it's possible to find other abnormalities in their psyche. Some mental health struggles should not disqualify a person from elective office. 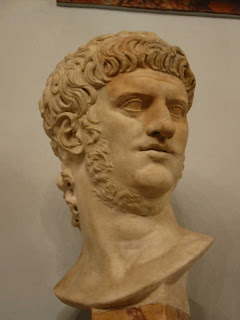 Another problem with Dr. Ghaemi's theory is that we often place too much emphasis on the characteristics of leaders to understand how things happen and too little on the circumstances that surround them.  This is called the Great Man Theory of history.  It may be irrelevant in the long run whether Barack Obama is too normal or not to handle our current crisis if the movements around him do not motivate him to do what is necessary as he prepares his jobs address.  Roosevelt and Lincoln were pushed to do great things like create social security and end slavery by popular movements which had been working for years to make these things happen.  This doesn't mean that leaders do not matter.  No one wants leaders like Nero or Caligula.
**Related Posts**

Posted by CSI without Dead Bodies at 4:06:00 PM No comments: