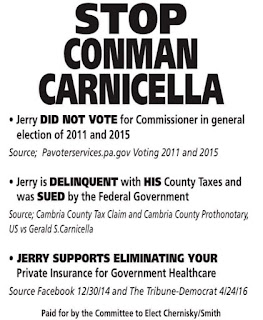 Above is an ad run by Democratic Cambria County Commisioners Tom Chernisky and BJ Smith against their opponent, Republican Jerry Carnicella.  They take him to task for not voting in the last two commissioner elections, being delinquent on his taxes and supporting a single payer/Medicare for All healthcare system.  I can't comment on the first two allegations against him but I can on the third.

In 2016 when he was challenging John Wozniak in the Democratic Primary for his state senate seat and I was organizing for Bernie Sanders, he called me offering his support.  He talked about his support for single payer and how he could get the Paterno family involved in the campaign.  I suspected he was full of it because the Paterno family are Republican.

He lost to Wozniak and then two years later he ran as a Republican against State Rep. Frank Burns and nearly won.  Now he is running for county commissioner and the Democratic and Republican establishments (led by Mark Pasquarilla and the other GOP commissioner candidate Scott Hunt) are organizing against him.  He was the top vote getter in the GOP primary this year while positioning himself as a pro Trump Republican.


Carnicella responded to the criticism of his healthcare position by pointing out that "Ok so now the viewers are lost and confused and our heroes start talking about me wanting to take peoples social security and Medicare away from them . Yeah like I’m going to take away the two best benefits I receive as a man over 65 ! If that’s not crazy enough let me remind everyone that they are both federal programs and a county commissioner has absolutely no say when it comes to those things ."  But what they are alleging is that he wants to take private insurance away and replace it with a single payer plan which he didn't really answer.

Interestingly his opponents are not taking him to task on his proposal to close down all of the methadone clinics in the county.   He says addicts should be given Narcan or Vivitrol only once and then forced into a county owned treatment program.  All of this vindictiveness would would drive addicts further underground a running to their friendly neighborhood heroine dealer.

Carnicella is much like Trump.  Trump once supported Single Payer back in 2000 but now is on board with repealing Obamacare an immigrant bashing.  Chernisky and Smith are trying to use single payer to drive a wedge between Carnicella and Republican voters.  Trump's GOP opponents tried that to no avail.  We'll see what happens on election day.

Election Reflections: Gains for PA Democrats Outside of Cambria County

Posted by CSI without Dead Bodies at 4:40:00 PM No comments:

Back on April 4, I posted on how African American life expectancy in Cambria County lagged behind the state and US rates and behind other groups.  This can be seen in the Table below.  Questions were put to me on how the opioid epidemic might be related to this discrepancy.


The website Overdose Free PA presents drug overdose data for Cambria County and the other 66 Counties in the state.  It states that between 2015 and 2018 there were 299 drug overdose deaths in the county.  90% of these deaths were Caucasian and 8% were African American.  78% of the deaths were between the age of 25 and 54.  67% were male.  Many of the dead had multiple drugs involved.

The the % of African-American deaths (8%)  was higher than their % of the population of the county (3.4%), these numbers suggest that opioids were less involved in the low life expectancy for African Americans.  However, they do suggest that they are involved in low numbers for Caucasians.  In Cambria County Caucasian life expectancy was 2.4 years lower than the US rate and 2.8 years less than the Pennsylvania rate.  The low life expectancy for African Americans appear to be driven by a high child mortality rate as seen in the table below.  Child mortality is different from infant mortality.  it refers to deaths after infancy.

Two posts I talked about how ago I spoke about how educational attainment (defined as having a bachelors degree or higher) and and the % white in Pennsylvania counties predict 86% of Trump's vote in the state.  Once in a while new county level data is released and I add it to the regression mode.  The Pennsylvania Health Cost Containment Council came out with the opioid overdose rate for people age 15 years and up for every county in the state in cases per 100,000.  Cambria county was ranked 5th in the state while Philadelphia was ranked first even after adjusting for population.

The missing rates could be imputed using an imputation technique for the 25 missing counties.  The simplest method would be to use the midpoint of the range for a missing rate (0 to 10 cases) and compute the rate by dividing by the population of interest.  For these counties the differences in the rates would be determined by differences in population.  This is a crude method of replacing the missing rates with plausible values.  There are more sophisticated imputation methods based on other descriptive values for the counties but one cannot really draw firm conclusions about these imputed values.

Because of the missing data I thought it best not to add it to the model for Trump's % of the vote.  Below are a sampling of the rankings of rates for the 42 counties with rates.  In parenthesis are the total OD cases on which the rates are based.

How is Washington DC an outlier? Let's count the ways. (Repost from Data Driven Journalism)

Ivory Tower Science and the Rest of Us

Posted by CSI without Dead Bodies at 7:59:00 PM No comments: