Paul Brown, the Father of Most NFL Head Coaches: Including the Rams and Bengals 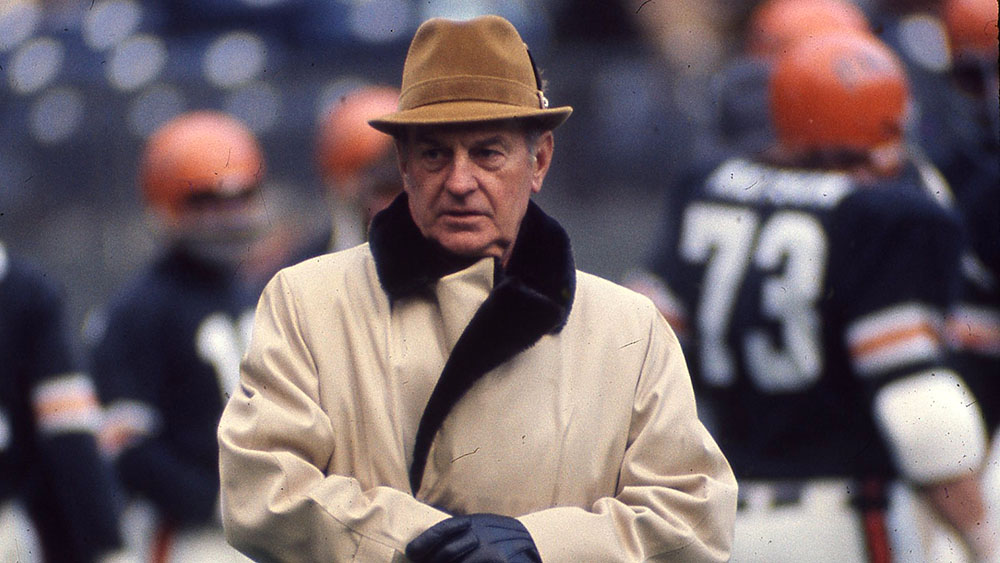 As Tom Brady retires, many people talk about GOATs (the Greatest of All Time). As for coaches many, will mention the name of Vince Lombardi as the GOAT for coaches.  While that may be true for winning championships (3 NFL titles plus 2 Super Bowls), there is another coach who I would argue is the greatest at mentoring other coaches.

Paul Brown was the founder of the Cleveland Browns who entered the NFL in 1950 when the league merged with All American Football Conference (AAFC). The Browns won four straight AAFC titles and, when they entered the NFL, they went to six straight NFL championship games winning 3.  Eventually, Brown lost his job in Cleveland in 1963 in a power struggle with new owner Art Modell.  He only faced Lombardi on the field once losing 49-17 to the Packers.  Brown went on to found the Cincinnati Bengals in 1966 in the AFL who will be playing in Super Bowl LVI.

Just as we can trace our family genealogies, we can trace our professional genealogies based on who our mentors are.  Don Shula and Chuck Noll both played for Brown.  They went on to win six super bowls and another 500 plus games between them.  Bill Walsh was his assistant coach in Cincinnati and went on to win another 3 Super Bowls with the 49ers.  Two  of Walsh's three wins were against Brown's Bengals after Brown retired as head coach but still owned the team.

Walsh went on to mentor Mike Holmgren who went on to mentor Jon Gruden who likewise mentored Sean Payton, the coach of the Rams.  Current Bengals Coach, Zac Taylor was mentored by Sean Payton and was hired by Brown's son in Cincinnati.  Subsequent generations of coaches mentored by Brown's descendants include Bill Parcells, Bill Belichick, Tony Dungy, Bill Cowher, Marty Schottenheimer, Andy Reid, and Mike Tomlin.  If you would like to add the total number of Super Bowls won by Brown's mentees it would come to 27.  This includes coaches that Bill Walsh has mentored that are not included in the image below.   Since both coaches for the Rams and Bengals are descendants of Brown, There is guaranteed to be a total of 28 Super Bowls won by his descendants which is exactly half of all Super Bowls played.

Does playing in the NFL help a head coach? Not in the Playoffs

As I write this LSU and Clemson are playing for college football's national championship.  Many of these players in the game and many players not in the game hope to play or coach in the Super Bowl someday.  Recently the governor of California signed a law allowing college players to accept sponsorship deals while in college which is banned by the NCAA.

A recent ESPN documentary discusses the issue of players getting paid.  College coaches are now paid in the millions of dollars which is close to NFL coaches.  I personally believe that, ideally, the NFL and NBA should have a farm club system like the NHL and MLB.  The first two leagues mentioned in the last sentence get lots talent from college sports for free.  Using a farm club system would take a lot of the hypocrisy out of college sports.

The players are supposed to be there to get an education.  While they are there they should have enough to live on but sponsorship deals would most likely go to the elite players while the average players would get the scraps.

These are coaches who were selected by Athlon.com on who they think are the best coaches.  Some were coaching in the 1940's and 50's.  As I did with the NFL coaches, I looked at modern NBA coaches whose careers spanned the modern era and who took their teams to the NBA finals from 1966 on to the present day.  The raw data I collected can be seen here.  It is summarized in the table below.


Like in the Athlon NBA list, there is a stronger presence of coaches who did play in the NBA than there is in the NFL.  29 out of 44 elite coaches had played in the NBA or 65.9% while 23 out of 51 NFL coaches or 45.1%.  This difference is statistically significant with a p-value of 0.045.  The coaches who played in the NBA had higher winning percentages in the regular season and the playoffs which is a different pattern than in the NFL.  The NBA coaches in the who did and did not play were roughly equal in the number of championships per coach.  Red Auerbach was included in the 15 coaches who did not play.

There is a difference between the NFL and NBA in their elite coaches with a stronger preference for ones who did play in the NBA.  Among-st the elite coaches there were 9 out of the 44 who were African American in the NBA or 20.4% while in the NFL 4 out of the 51 or 7.8%.  This difference is not statistically significant while close to 70% of the players in both leagues are African American.

Does playing in the NFL help a head coach? Not in the Playoffs.

What Shaq can teach us about Climate Change

Does playing in the NFL help a head coach? Not in the Playoffs.

NFL Playoff time is upon us.  While my Steelers won't be there there will be plenty of action.  How the coaches handle their personnel will go a long way to determine who wins.  Athlon sports produced a list of the top 25 NFL coaches of all time.  I notices that some of the top coaches on the list never, such as Vince Lombardi and Bill Belichik never played in the NFL while others such as Don Shula, Tom Landry, and Chuck Noll had.  I thought I would take a closer look at whether playing in the NFL was a predictor of their success.

Another reason  could be that the adage "great players do not make great coaches" holds here.  Only a few of the player-coaches could be considered stars on their teams (like Mike Ditka) but they were good enough to make it to the NFL.  You can speculate as to other reasons (i.e. Concussions) for this difference.  You can see the full list of coaches in this post here.

The NFL just fired 5 of it's 7 African American head coaches. The Steelers Mike Tomlin and the Chargers Mike Lynn are now the only two left in the league.  In the data set used here there were four African American Coaches (7.8% of the total of 51 for the super bowl era).  Three of them did not play in the NFL, Mike Tomlin, Jim Caldwell, and Lovie Smith and one did, Tony Dungy.  All four coaches have a combined winning percentage of 59.7% with 2 championships.  They have a winning % 60.4% in the regular season and 47.8% in the playoffs.  Tomlin and Dungy were listed in the Athlon all time coaches list (8% of the 25).

According to Dave Zirin at The Nation magazine, the number of African head coaches has never been nigher than 30% of the total head coaches in one year when they are 70% pf the players.  Would a different pattern emerge if I looked at coaches with this experience in the NBA, MLB or NHL?


The Super Bowl That May be Someday: A Steagles Super Bowl

Posted by CSI without Dead Bodies at 1:41:00 PM No comments: