My last three posts have looked at healthcare campaign donations to freshman democratic members of congress, their ethnic/gender background, and support for medicare for all.  They showed that nonwhite members who support Medicare for All received far less in donations than non white freshman who did not and white freshmen who either did or did not support it. Four of the freshmen, Alexandria Ocasio-Cortez, Ilan Omar, Ayanna Pressley, and Rashida Tlaib, have received press for butting heads with Nancy Pelosi and being targeted by Donald Trump in a tweet where he said that they should go back to the "crime infested" countries from which they came.  All four support Medicare for All. 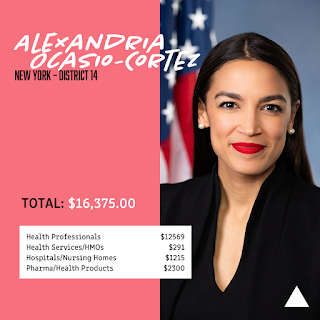 These four congresswomen were included in the data for the analysis.  You can see all of the donations that they received as compiled by Danielle Keeton Olsen at Tarbell here and in the images above.  The first three of the 'squad' were classified as nonwhite according to the US Government's affirmative definition of race/ethnicity in the analysis.  I determined the ethnicity of each freshman democrat based on their Wikipedia page.  The data is listed here.

Congresswoman Tlaib (D-MI) was classified as white by the affirmative action definition.  Whites or Caucasians are defined as "people having origins in any of the original peoples of Europe, the Middle East, or North Africa."  She was also the largest recipient of healthcare campaign dollars among the 'squad' at $172,665.  This is more than the other three squad members combined at $158,903.  This pattern is present in health professionals, hospitals, and pharma but not in HMOs where she received less ($5,019) than the other three combined ($12,841).

Congreswoman Tlaib may see herself as nonwhite while most donors see her as white.  Her ethnic background in Palestinian who have been oppressed for decades by Israel in the middle east.  I personally see Italians as Latino even though no one else does.

Posted by CSI without Dead Bodies at 2:58:00 PM No comments:

One Republican candidate for the US Senate who has benefited from media circus surrounding Christine O'Donnell in Delaware, Carl Palladino in New York in the neighboring states and head stomping in Kentucky is Pat Toomey who is running in Pennsylvania for Arlen Specter's seat against Congressman Joe Sestak.

Toomey is a conservative former Congressman who fought against government regulation of the financial industry. His other views are mostly in the mold of Senator Rick Santorum who was defeated in Pennsylvania in 2006.

Prior to his years in the House of Representatives (1998-2004), Toomey worked as a successful derivatives trader in the US, Great Britain & Asia. His opponent this year, Joe Sestak, has tried to use this past against him in 30 second campaign ads but Toomey can easily counter this with 30 second ads of his own by pointing out that it was Sestak who voted for the $700 billion bailout (Toomey was lucky enough to not be in Congress at the time. I wonder how he would have voted?) for Wall Street and associating him with boogy woman Nancy Pelosi.

Because Toomey has been careful not to give Jon Stewart et al. any great soundbites, he has been able to maintain a solid lead in the polls. Derivatives are too abstract to explain in 30 seconds. Below is a link to an article in Mother Jones magazine that chronicles his Wall Street years and explains derivatives in greater detail than Sestak has so far. It shows how Toomey is far more dangerous in the long run than Christine O'Donnell could ever be.

Posted by CSI without Dead Bodies at 7:41:00 PM No comments:

In campaign ads by Republicans running this year, House Speaker Nancy Pelosi's (D, CA) image appears the most as an object of fear even more than Barack Hussein Obama or any other, Democratic Leader. In right wing blogs more grotesque images of her appear such as the one reproduced here. Why?

Does she go around saying nutty things like Christine O'Donnell or Cynthia McKinney? Did she run away from her public service duties like Sarah Palin? Could she be she any more power hungry or sleazy than Newt (gives his first wife divorce papers while she was in the hospital with cancer) Gingrich, Tom (currently under indictment) Delay or Charlie (Dominican Republic Tax Shelter) Rangle? Is she any more of an aggressive power broker than Harry Reid (who may lose his job to another nutty ditz like Sharron Angle) or Rahm ("Obama's most loyal supporters are f_ing retarded") Emanuel? The answers to these questions are no. If anything she disappointed some on the left when she immediately ruled out impeaching George W. Bush and Dick Cheyney after becoming speaker for their war in Iraq, warrantless wiretapping, torture memos, outing of Valerie Plame etc. and this is how they repay her?

Could it be because she represents the city of San Francisco in the House of Representatives? Hmm with what is this city often associated? The 49ers? The Golden Gate Bridge? Tony Bennett? Alcatraz? Not to the right wing in this country. For them it is homosexuals and the summer of love. Outright gay bashing is not is not as acceptable as it used to be so she has become a code word for it.

Factcheck.org has an analysis of how House member's voting in unison with Pelosi is exaggerated by Republicans in ads (and by Democrats who want to distance themselves from her).

Democrat Jim Marshall uses hippie imagery of San Francisco to dissociate himself from Pelosi (he lost).

**Update**
The demonizing may have worked she will no longer be speaker in January but she ran for House Minority Leader. She won 150-43 against Heath Shuler because the House Progressive Caucus only lost one member on Tuesday while the moderate Blue Dog Caucus who demonized her too in their ads lost half of their members. In the one ad above, Jim Marshall D-GA lost 53%-47%.One Pittsburgh Congressman, Mike Doyle, has announced support for her. If that is the case look for more demonizing in 2012.

**Check out**
Pelosi Easily Retains Leadership Post; Now She Must Lead | The Nation
Now that Speaker Pelosi will soon be Minority Leader Pelosi the focus should now be put on the Senate Democratic leadership
Posted by CSI without Dead Bodies at 7:37:00 AM 4 comments: