Pennsylvania has Become the First State in the U.S. to Curb the Governor's Emergency Powers

In the 2021 primary election in Pennsylvania there were 2 constitutional amendments on the ballot to limit the Governors emergency powers in times of a pandemic or natural disaster.  The first amendment empowers the state legislature to terminate or extend a disaster declaration with a simple majority without input by the governor. The second amendment places a 21 day limit on a disaster declaration with legislature approval needed for an extension.  A fuller explanation of these amendments can be seen here. 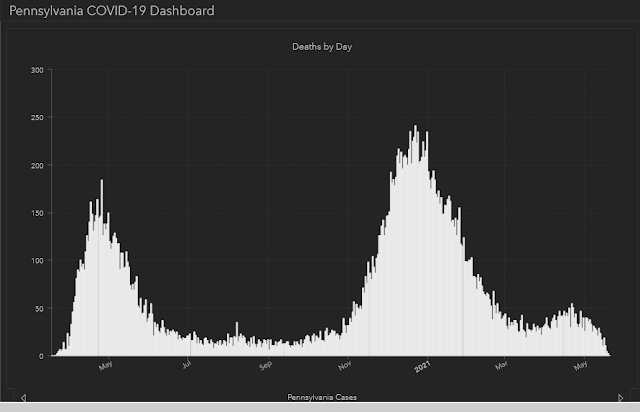 For example, in the not so distant future, natural disasters related to climate change could befall this and other states.  A legislature with a majority of climate change deniers can block the governor from taking action beyond 21 days.  There is no way of knowing how many lives Gov. Wolf's disaster declaration saved but it did save lives.
The graph above shows the daily death counts in Pennsylvania since the pandemic began.  Restrictions were made in March the death counts rose until May and then leveled decreased as personal protective equipment and ventilators became more available.  The restrictions were eased in June and deaths did not rise.  The deaths began to rise after the November election due to mask-less rallies held by the Trump campaign in the state.  Due to this restrictions were then tightened during the Christmas holidays and the deaths decreased in the state (though higher than it was before the election).  Roughly 21% of the state's eligible voters voted in the primary.

The voters who went to the polls and voted yes on these ballot questions (10.8% of the electorate in Pennsylvania) are rebuking Gov. Wolf for listening to scientists such as Rachel Levine.  Levine now works for the Biden Administration as the first transgender department head.  The right has distributed images like the one above to demonize the governor and Dr, Levine.  One has to wonder how much transphobia played a role in this primary.
Our county, Cambria County, still ranks 9th in the state in case mortality and 5th in deaths/100,000 while it voted 63% for both measures.

The second installment of We Are All In This Together: Pandemic-Johnstown 1918 has come out and can be seen above.  Recently there has been a rise in cases as spring has sprung.  Since the terrible months of December and January, the 7 day average for new cases fell from 214.29 on Dec 11 to 14.29 on March 20.  Since then, the 7 day average has risen to a high of 58.43 on April 19 to 49.29 today as can be seen in the graph below.  This rise has occurred after the vaccine rollout began on Jan 8. 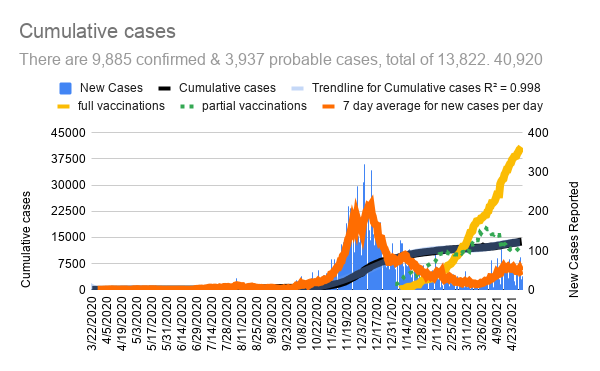 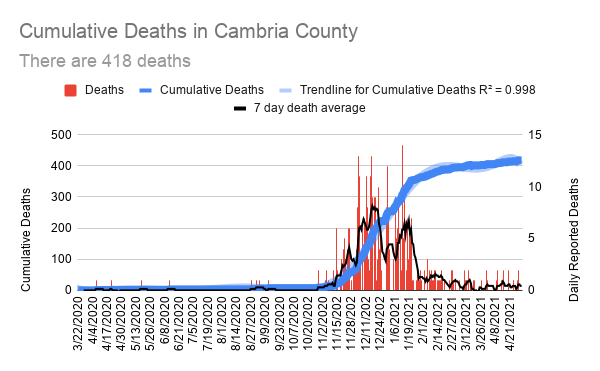 Since the cases have risen, the deaths in the county have remained fairly stable as can be seen in the above graph.  The 7 day average for deaths reached a high of 8.14 deaths per day on Dec 17 (6 days after the spike in cases).  Since March 16, the average has not risen above 1 death per day. 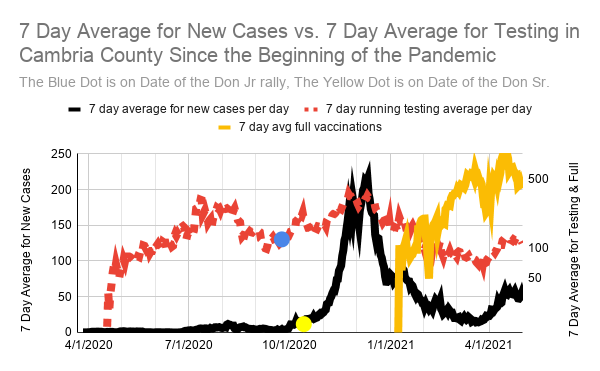 The graph above shows the trend in the 7 day average for new cases (black line), testing (red dotted line) and full vaccinations (orange line).  The lines for testing and vaccinations are on a logarithmic scale.  The number of full vaccinations per day has fallen from a high of 855.4 on April 14 to 399.9 today.  On April 13 all Pennsylvanian's over age 16 became eligible to receive the vaccine.  To date 40,920 of 31.43% in Cambria County have been fully vaccinated. 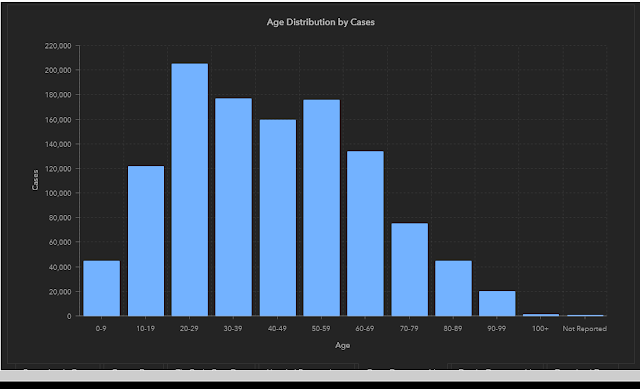 This graph from the state department of health shows that the majority of cases are between the ages of 20 and 59 throughout the state.  This information is not available at the county level. 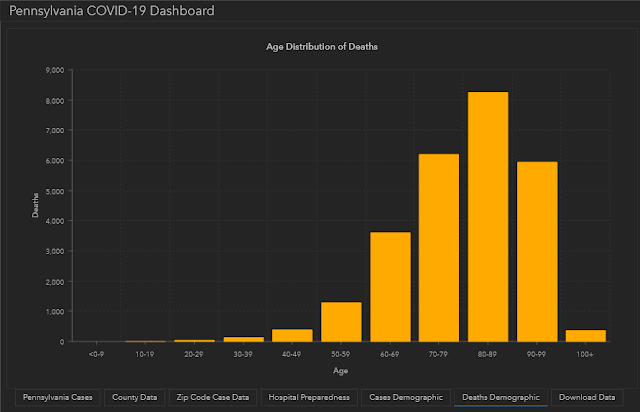 This final graph shows that the vast majority of deaths in PA have been between ages 60 and 99.  The early phases of the vaccine rollout have focused on groups most vulnerable such as the elderly.  The vaccinations seem to be curtailing the number of deaths even though there has been a rise in cases.  The younger age groups still need to be vaccinated to stop the spread of the virus.

One Year of Corona Virus in Cambria County

The 2021 County Health Rankings are Out

The 2021 County Health Rankings are now out for every county in the US.  The rankings use more than 60 government statistics to assess the overall health of each county.  Above is a video description of their model.  They have two overall rankings for the state: Health Outcomes (mortality and quality of life data) and Health Factors (things that contribute to the health outcomes). 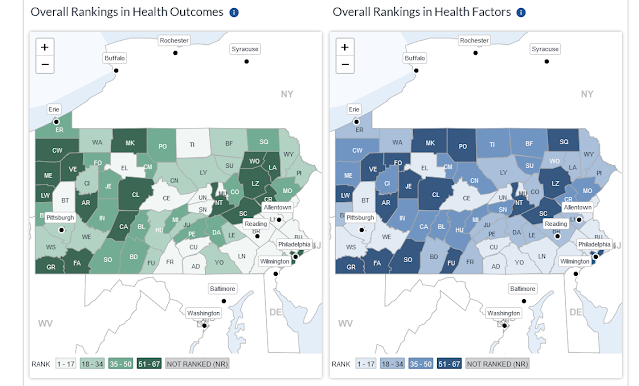 The maps above show the rankings for each county in Pennsylvania.  The darker green counties have lower health outcomes rankings while the counties with darker color blue have lower health factors ranking in the map on the right.  Cambria County ranks 62nd in health outcomes (up 2 spots from last year which is not cause for celebration) and 47th on health factors which is down 3 spots since last year.

For me the overall rankings are not as interesting as the underlying statistics used to determine them.  Two individuals can have the exact some IQ score but one can have a high verbal aptitude while another can have an equally high math ability. The graph below shows the trend in mortality data (measured as years of potential life lost or YPLL). 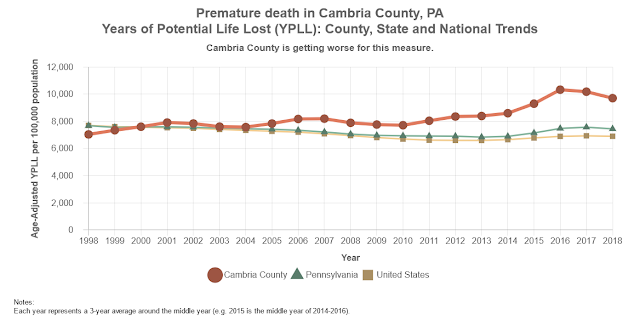 In my book, I went in depth into the rankings to explain why last year's rankings were so low.  It was mostly racial disparities in life expectancy in the county.  In the next few posts I will go in depth into this years numbers.  Corona virus numbers are not yet factored into the rankings as 2019 is the most recent year for mortality data.  The graph above shows that Cambria's rate, though decreasing, is still higher than the state and U.S. rates.

The graph above shows that Cambria's rate, though decreasing, is still higher than the state and U.S. rates.

One Year of Corona Virus in Cambria County

March 23 will be the one year anniversary of the first case of coronavirus in Cambria County.  The graph above shows the trend in cases and vaccinations over the past year.  The graph below shows the trend in deaths.  The first death was reported on April 7.  The county now (as of this writing) has 12,059 cases, 402 deaths, and 19,664 full vaccinations.  As I update the numbers on Google sheets, the numbers on the graphs in this post will be updated.

I have been tracking the number of cases and deaths almost every day over the past year.  It has been a labor of love keeping track of the pandemic here.  The feedback has been mostly positive to this effort.  As more publicly available data has been released over the year, the effort has taken more and more of my time every day.  In addition to the daily posting of numbers, I have written 34 out of 47 posts on corona virus on this blog.  The more insights that I can provide for the public to guide decision making the better.

In This Together Cambria is putting together a slideshow showing the resilience of the area to the past years challenges.  Submissions are due by March 26.  One story I can add is the passing of Rosie Caeti, an old family friend who passed away last on March 13 from complications from Corona Virus at 87.  She used to babysit my dad when he was young.

Soon, the county health rankings for every county in the US will be released for 2021.  I do not yet know how or if coronavirus deaths will factor into the rankings.

What other Variables Contribute to Nursing Home Mortality in PA?

Two weeks ago I looked at the correlation between the percentage of residents over the age of 66 in the county with the percentage of total county deaths in a nursing home and the case mortality rate in the nursing home.  This week I'm looking at the the additional variables of the % of the county in a rural area and the median household income in the county.  Of these, the relationship between case mortality and median income was the strongest accounting for 14.9% of the variability in the rates.
While this is a relatively weak (though significant) positive correlation there is a stronger correlation between that may moderate this relationship.  There a stronger relationship between % rural and % over the age of 66 of 0.62 (seen below).  Both of these have a relatively strong negative correlation of -0.49 and -0.48 with median household income respectively.
The % over the age of 66 has a stronger positive correlation with the case mortality in the county (0.33) that it does with case mortality in a nursing home (LTCF) (-0.30 which is smaller in absolute value than 0.33).  This suggests that the elderly who live in more rural counties are more likely to die outside of a nursing home from corona virus.  The more rural and more elderly counties are also more likely to have lower incomes.

This week I thought I would take a look at mortality in nursing homes (or Long Term Care Facilities (LTCF)) in Pennsylvania.  Statewide, nursing home deaths account for 52.1% of the total coronavirus deaths.  Looking at the county level there is considerable variability in the rates where the 10 counties with the highest rates are seen below.  The rates for this group rage from 115.8% for Forest county to 67.2% for Delaware County.  Forest county actually has 3 more LTCF deaths than total deaths with one facility.  This suggests that at least 3 of their residents reside outside the county.  You can see the full list of counties here.

The bottom 10 counties are listed below.  The percentage of deaths in the in LTCFs for this group rage from 35.7% in Sullivan County to 15.0% in Potter County.  Surprisingly, Philadelphia county is in this bottom tier with 26.1% of their deaths in LTCFs.  Another way of looking at mortality in LTCFs is the case mortality or the % of cases who have died.  Philadelphia ranks 11th in the state on this measure with Pike county ranking 1st at 27.0% and Cameron County ranking last at 4.3%.

I looked at the percentage of the population in each county over the age of 65 and found some interesting patterns.  For the correlation with % of deaths in LTCFs, as the proportion of the population over 65 increases the % of deaths decreases as seen with the graph below.  Forest county is an outlier and is labeled green in the scatterplot.  With Forest county included, this relationship accounts for 6% of the variability in the data.  When Forest county is excluded, the relationship accounts for 11.6% of the variability in the data and is still negative.  I don't have a good explanation for this but will investigate further.
I then looked at the correlation between case mortality and the % of the county over 65.  This relationship was also negative accounting for 11.3% of the variability.  Pike county is a mild outlier.  With Pike excluded, this relationship accounts for 16.6% of the variability.  This pattern is similar to the one with the percentage of deaths in the county.
Case mortality and % of deaths in LTCFs are positively associated but not strongly accounting for 15.3% of the variability.  There may be stronger relations ships among the variables not considered yet.  There also may be variables at the facility level to which I do not have access.  Investigating will continue.

A Look at Vaccinations in Pennsylvania: Montour County has a high Vaccination and Hospitalization Rate