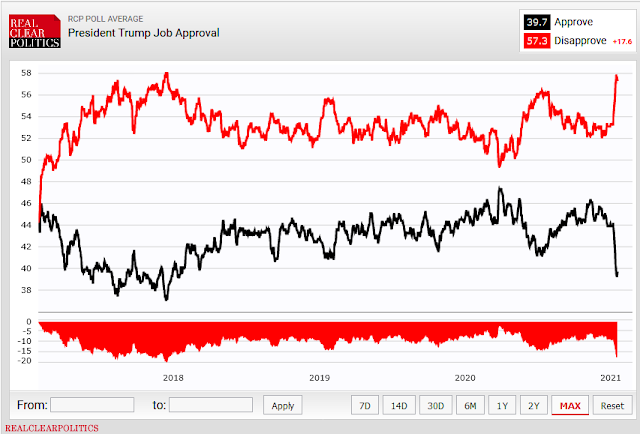 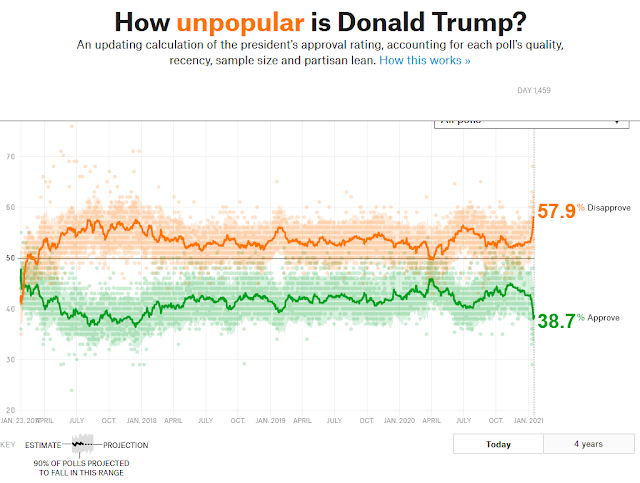 I'll take another break from Coronavirus to talk about my book and the second anniversary of my Best Nonfiction Book of All Time poll.  Hopefully it's more inspiring this holiday season.  First my book.

Wuthering Depths in Johnstown: By the Numbers now ranks tenth on the Made in Somerset County best seller list out of 46 books.  It is now listed as sold out so I will have to get them more copies for the holidays.

As a reminder I will be having a book signing at AT Merchant in the Galleria Mall in Johnstown this Saturday from noon to three.  Hope you can make it.

My book is now available at Riek's of Brownstown in addition to the other bookstores:  Classic Elements, Young Hearts Books and Toys, Chameleon Bookstore, Second Chapter Books in Ligonier, and the Bottle Works Ethnic arts Center.

This week marks the second anniversary of my poll for the best nonfiction book of all time.  This time last year, the poll had 45 responses.  This year it has 57 total responses.  The top 6 responses are in the table below.

As you can see, there is currently a tie for the top spot between the Origin of Species and Anne Frank: The Diary of a Young Girl.  Last year, Darwin's book held the top spot while Anne Frank's diary was in the tie for second with the Silent Spring.  Night by Elie Wiesel moved up one spot.  Stephen King's book On Writing entered the top 5 while Henry David Thoreau's Walden moved down one spot.

You are more than welcome to break the tie or create new ones by voting in the poll in by clicking on the tab at the top.  There is no finality to the poll but you can make your voice heard.

How Does Trump Stand for Reelection Now? 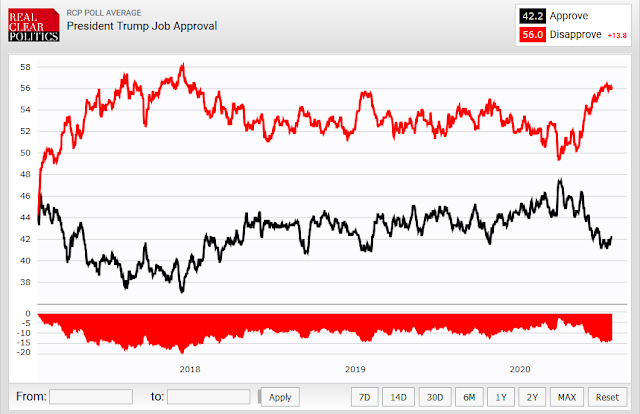 Some pundits have written off Trump's reelection chances due to his handling.  They often point to the results of one poll to reinforce that conclusion.  I would argue that it is better to look at the aggregate of polls to see trends.
The Real Clear Politics (RCP) average of polls includes Republican polling firms like Rasmussen, neutral firms like Politico and Quinnipiac, and Democratic firms like Change Research.  In the graph above we see that the RCP average for Trump's approval rating has steadily declined from an all time high of 47.3% at the beginning of the Coronavirus pandemic to 42.2% today.  This number is still higher than Trump's all time low rating of 37.1% on December 17, 2017. 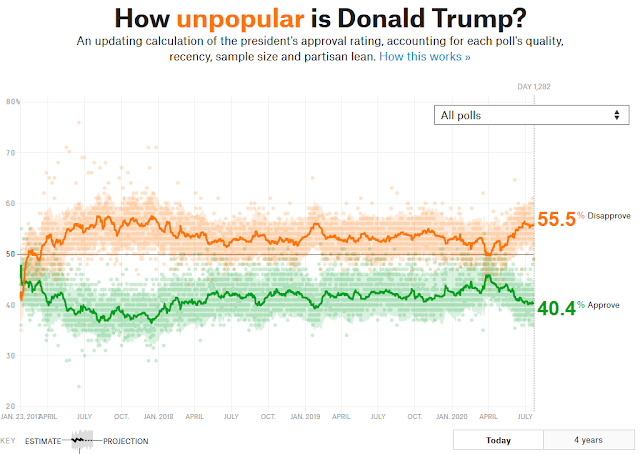 Nate Silver's fivethirtyeight.com website estimates his current approval rating to be 40.4%.  This number is still higher than their all time low estimate of 36.4% on December 17, 2017.  Silver's group uses a different than RCP that you can read about here.  In both poll estimates, Trumps approval rating has never been above 50%.
FiveThirtyEight also provides a comparison of Trump's approval rating the past 12 Presidents at the same point in their Presidencies (1282 days) going back to Harry Truman.  Of these past 12 Presidents, only three had approval ratings lower than Trump's and this point: Truman (39.6%), Carter (33.9%), and George H.W. Bush (36.7%).  Truman managed to win his election bid while Bush and Carter lost.  Ford was in office for fewer than 1282 days and he lost as well.  The other Presidents either won their reelection bids or left office before running again.
RCP's poll average of national polls has Biden leading Trump 49.6% to 40.9% while FiveThirtyEight has Biden up 50.0% to 42.0%.  One should always be careful about making predictions about the outcome of the November election this early.  However it is pretty clear that he faces a tough bid to win this year.  In the month of June 2016, Clinton had a lead of 5.7% over Trump while Biden had a lead of 7.7% over him in June 2020.  He could still eek out an electoral college win with his loyal supporters.
** Related Posts**

Coronavirus and the 2020 Election

Posted by CSI without Dead Bodies at 3:41:00 PM No comments:

Coronavirus and the 2020 Election 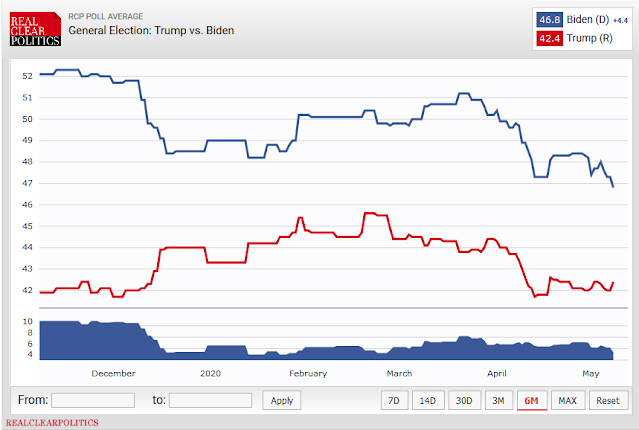 It may be to early to say what impact Tara Reade's allegations have had on the Trump-Biden race.  Both candidates have lost support in recent weeks as can be seen above.  At the beginning of April, Trump's overall approval rating reached its highest point at 47.4% in the RCP average.  It has since fallen to 44.6% which is close to where it was before the pandemic started.
I stay away from making predictions, especially this far out.  Anything is possible in the next few months.  The crisis has given the administration cover on the economy.  They can blame it on the virus.  Both sides will demonize China.  Pennsylvania Governor Wolf has announced that
**Related Posts**

Bernie Sanders is as Electable as Clinton

The Democratic Presidential race has changed radically since the South Carolina Primary.  As a Bernie Sanders supporter I was so hopeful for him to have a strong showing.  The outcome was very sobering.  I thought I would take a look at the exit poll data from SC and other states from Super Tuesday on the issue of Sanders' Medicare for All (M4A) proposal.


South Carolina and the five southern Super Tuesday states are summarized in the above tables.  The numbers right below "Support" and "Oppose" are the percentage of primary voters who either support or oppose the statement "How do you feel about replacing all private health insurance with a single government plan for everyone?"

It is also known that older African American voters overwhelmingly supported Biden.  The exit poll does not state whether they were more or less likely to support Medicare for All.


Three of the states outside of the deep south where Sanders fared better against Biden are shown above: Massachusetts, California, and Vermont.  In Massachusetts the 69% who supported M4A favored Sanders over Biden by 41% to 23%.  Warren received 27% among those who do.

In California and Vermont, Sanders had strong support among those who support M4A.  Biden won among those who did not.  The lesson from these primaries and the 2016 and 2008 elections is that it is almost impossible to win the Democratic party nomination for president without substantial African American support.  It would be interesting to look at what role support for M4A plays in this.

Biden has now won Mississippi, Michigan, and Missouri.  In Mississippi 60% of voters support M4A but 75% of those voted for Biden.  In the video below, Biden said he would veto any M4A bill that came to his desk as president.  In Missouri and Michigan those supported M4A preferred Sanders.