State Trends in the Uninsured | Health Care 4 ALL PA 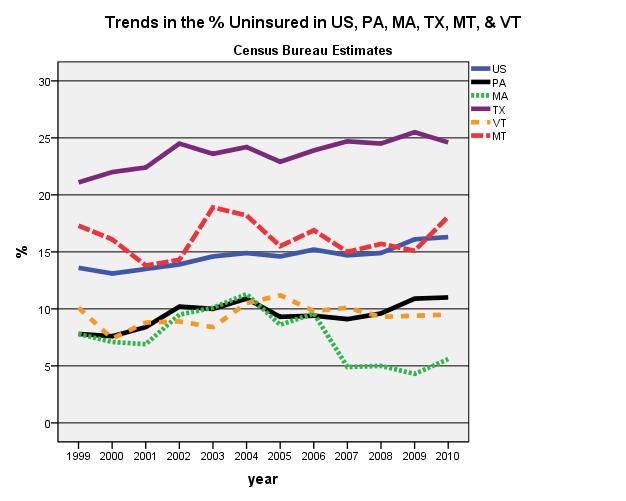 My latest guest post is up at Health Care 4 All PA.  You can read my commentary on the graph at the left at the link below.
State Trends in the Uninsured | Health Care 4 ALL PA
**Update**

My guest posts for Health Care 4 All PA are down temporarily due to site maintenance.  I will rehash here what it says.

The Census Bureau came out with poverty estimates for the US and each state from 1999 to 2010.  They also made available for download state and US level estimates of the % uninsured over the same time period.  For comparison purposes I plotted above the US rates (in light blue above), Pennsylvania rates in black because they are of most interest, Texas on the solid purple line because it had the highest uninsured rate in the US in 2010, Montana on the dotted red line because their governor is pushing to enact a single payer system, Vermont on the dotted yellow line because they enacted a single payer system earlier this year, and Massachusetts on the grey dotted line because they enacted a health care plan similar to the federal health care law in 2006 (aka Obamacare).

Texas was consistently above 21% uninsured over the last decade when George W Bush was governor.  Montana has struggled to stay at the national rate.  Pennsylvania, Massachusetts, and Vermont had similar rates until 2006 when the Massachusetts law was adopted.  The Ma rate was cut in half though still not universal coverage.  The Vermont plan has not been implemented yet.
Posted by CSI without Dead Bodies at 12:07:00 PM No comments:

My latest post is up on the Highmark West Penn Allegheny Health System merger and UPMC's response.  You can see a discussion of it by KDKA's Jon Delano (Franklin Delano Roosevelt's cousin, where he tries to sugarcoat it) here and the full discussion at the link below.

Posted by CSI without Dead Bodies at 3:22:00 PM No comments:

Email ThisBlogThis!Share to TwitterShare to FacebookShare to Pinterest
Labels: Single PayerHealthCare 4 All PA

My new guest post is up on Health Care 4 All PA on Vermont's Governor signing the first in the nation Single Payer Healthcare Bill.  I could not embed the video clip of Dr. Deb Richter's interview on their page so I put it here and linked it back here.