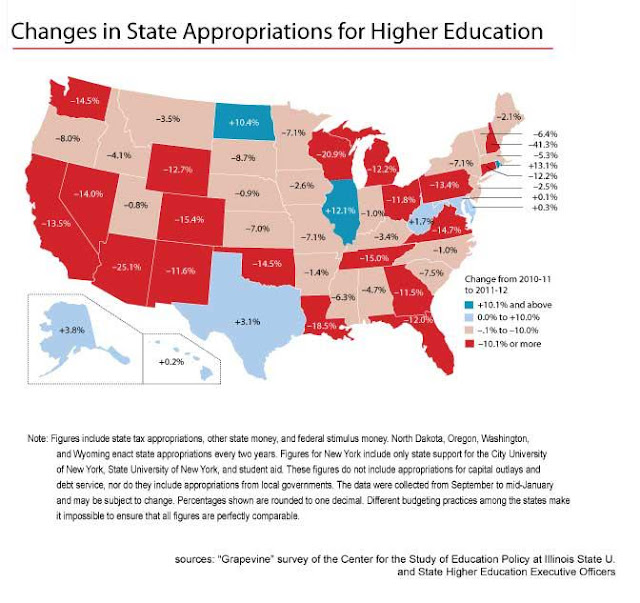 As the standoff at the State Capitol in Wisconsin continues over public employees and teachers to continue to have the right to collective bargaining with no end in sight a similar bill in the Midwestern state of Ohio passed it's State Senate this week by a vote of 17-16 with protesting crowd sizes maxing out at 8,500.  According to the Dayton Daily News "The bill undoes much of the 1983 law allowing public employee collective bargaining. It bans strikes, ends binding arbitration for police and firefighters, creates a merit pay system and layoff system using criteria other than seniority."   The State House is expected to vote on the bill this week and be signed by Gov John Kasich-R (who is a former Fox News contributor).
If one state is successful in passing this law while the other is not it will be bad for unions and workers in that state but it does present an opportunity for public policy and social science researchers to study the effects of these types of laws.  Both Wisconsin and Ohio are Midwestern industrial states of similar climate, industry, and demographic makeup.  This type of study would be called a quasi experiment (not a true experiment because the law is not randomly assigned).  A wide variety of variables could be studied as the workplace has an effect on a wide variety of quality of life issues.  The strain that public employees are under can have ripple effects throughout the state especially in times of crisis when services are needed from the State.  Even in normal times stress on the employees can have effects in their homes, on their marriages, and their kids.  If their incomes are affected so can the surrounding communities' economies.

There is plenty of other "experimenting" going on in other states both on the left and the right.  For example Vermont is trying to pass a Single Payer law to cover everyone (see Related Post below) while Pennsylvania 42,000 adults lost health insurance due to the Adult Basic Program being ended on March 1 of this year.  In the chart on the right many states including Vermont (single payer controls costs better than private insurers) are cutting spending to below prerecession levels providing many consequences for those dependent on spending and opportunities to study the effects of these consequences.  Pennsylvania can now be added to the map in red.

Last night the Wisconsin state Senate may or may not have bended the rules and passed the law 18-1 banning collective bargaining without the quorum present.  Whether it stands or not will depend on whether court challenges to the law and/or efforts to recall Senators who voted for the law are successful.  Governor Walker can be recalled in January 2012.  This could be a different kind of experiment in democracy than what we're seeing in Ohio and other states.

The Worden Report: Protests in Wisconsin and Bahrain: Similar or Different?

Posted by CSI without Dead Bodies at 4:41:00 PM No comments: