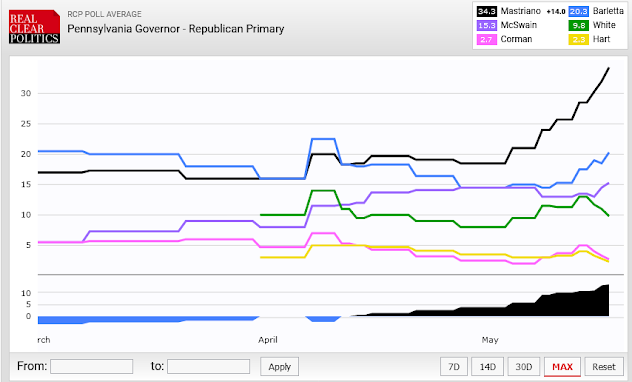 The 2022 Pennsylvania primary is almost in the books. State Sen. Doug Mastriano and Lt. Gov. John Fetterman won their respective primaries handily for Governor and U.S. Senator. Attorney General Josh Shapiro was unopposed for the Democratic Nomination for Governor while Dr. Mehmet Oz and and David McCormick are separated by roughly 1,000 votes for the GOP nod for the U.S. Senate.

The graphic above for the Real Clear Politics polling average for the GOP Governors race shows that Mastriano's lead began on April 15 and the gap began to widen on May 4. His actual percentage of the vote was 44% which was 9.7% higher than his final RCP average of 34.5%. The other candidates performed fairly close to their polling averages which suggests that the undecided voters broke for Mastriano in the last days of the campaign. This is partially explained by Trump's last minute endorsement of Mastriano. Jake Corman and Melissa Hart dropping out of the race to endorse Barletta had no effect. 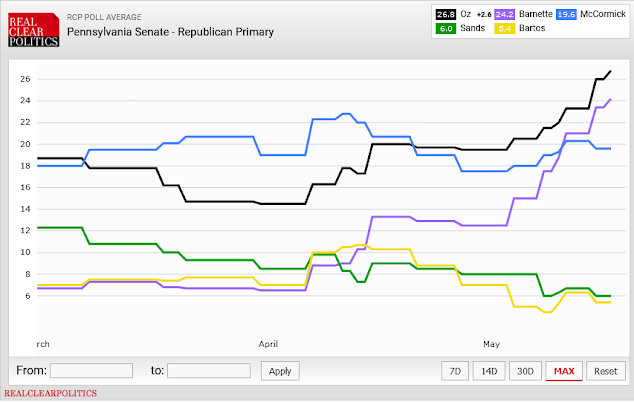 The Senate race in PA has received a lot more scrutiny than the governors race. McCormick received a bigger surge in the last days of the campaign. Oz's percentage of the vote was 4.4% higher than his polling average while McCormick's was 10.5% higher. Kathy Barnette performed almost exactly the same as her polling average. My cousin Casey Contres is biting his nails over this one with the upcoming recounts. Trump's endorsement of Oz did not carry the same weight in this race.

On a local note, State Rep Frank Burns defeated challenger Michael Cashaw 72% to 28%. There were no exit polls in this primary which makes it harder to determine what the voters were thinking. I also have yet to see head to head polling for the Democratic and the GOP candidates for statewide offices for the fall. One bright spot for progressives in PA is that Summer Lee has won her primary for congress in Pittsburgh despite a smear campaign from outside groups.

Posted by CSI without Dead Bodies at 4:58:00 PM No comments:

Two weeks ago I wrote about the new County Health Ranking (CHR) numbers for this year in Cambria County. As before, there was a big discrepancy in life expectancy between African Americans, Whites and Hispanics. The life expectancy estimate for Hispanics may be unreliable as they are a small percentage of the county population. The state life expectancy and racial U.S. life expectancy numbers are are from before the pandemic began.
As before I will go through the other CHR statistics to search for clues for this disparity:
Each year CHR provides more detailed information to explain the racial disparities in the health of the area. The next step is to take action to remedy these disparities.
Coronavirus numbers for the cases and deaths county were not broken down by race at the county level. However, case rates are provided at the zip code level. The vast majority of African Americans in the county live in and around the city of Johnstown. Case rates are higher outside of Johnstown than in the city and its suburbs (zip codes 15901 to 15909) as can be seen in the graph below.

Some Clues for Racial Disparities for Cambria County

Posted by CSI without Dead Bodies at 2:43:00 AM No comments:

Much has been made of the leaked opinion written by Supreme Court Justice Samuel Alito overturning the Roe v. Wade decision. The SCOTUS (or more accurately SCROTUS) decision will be made official in late June. If it hadn't been leaked, demonstrations, like the one above, would be erupting in June instead of now.

If this decision remains in June, the battle over abortion rights moves to the states making the upcoming elections even more critical. Pennsylvania's senate race was already receiving national attention with Pat Toomey retiring and celebrities like Mehmet Oz and John Fetterman running to replace him. The battle over state offices (Governor, Senate, and House) should become more heated as well.

This week, Franklin and Marshall College published a poll showing Dr. Oz with a 2% lead over David McCormick in the Republican primary for Senate. This difference is within the margin of error of 6.9% and and 39% of GOP voters are still undecided. This poll was conducted before the SCOTUS opinion was leaked. Only 4% of voters listed "Women's Rights: Pro-life/Pro-choice" as the most important issue for which candidate they will support in the GOP primary. Donald Trump's endorsement of J.D, Vance in the Ohio GOP Senate primary helped propel him to victory this week.

John Fetterman has a big lead in the same poll on the Democratic side with 53% of the vote over Conor Lamb with 14%. Among the Democrats, only 2% of the voters listed "Women's Rights: Pro-life/Pro-choice" as their important issue. I have a feeling these percentages have increased on both sides since the SCOTUS leak.

Among the GOP, Trump still has 70% of respondents saying that they have strongly of somewhat favorable views of him. On this metric, Dr. Oz has 29% favorability and McCormick has 31%. Likewise, Biden has 80% favorability ratings on the Democratic side. Fetterman has 77%, Conor Lamb has 46%, and Gubernatorial candidate Josh Shapiro (running unopposed) has 62%.

It remains to be seen how the SCOTUS decision will affect the race. There are infinite possibilities for what could happen between now and November. Certainly passions will be higher on both sides. Dr. Oz's campaign manager happens to be my cousin, Casey Contres.

Posted by CSI without Dead Bodies at 1:21:00 AM No comments: 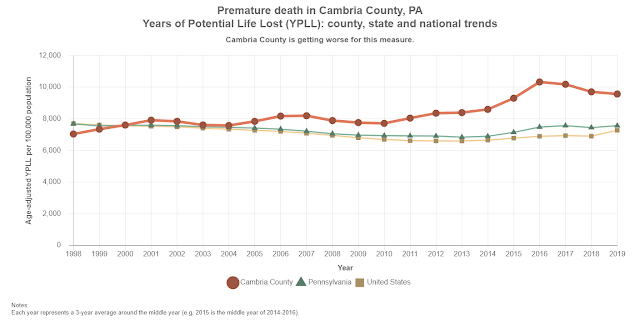 The length of life ranking is determined by one statistic: Years of potential life lost or YPLL. This statistic is the number of years lost before age 75. For example, if someone dies at age 25, they have 50 years of potential life lost. Cambria County had 9,600 YPLL compared to 7,600 for PA and 7,300 for the U.S in 2019. For African Americans in Cambria County, the YPLL rate was 20,900 compared to 9,200 for Caucasians. These numbers do not include the effect of the pandemic. Life expectancy is not included in the rankings but is easier to understand.
For the years 2018-2020, Cambria's overall life expectancy was 75.8 years. This is 2.2 years shorter than the state rate of 78.0 years and the U.S. rate of 79 years. For Caucasians, it was 76.1 years and for African Americans it was 66.9 years. One factor driving this racial disparity is child mortality.
For child mortality in Cambria County, the overall rate was 50 deaths per 100,000 and was the same as the overall state rate. However for African Americans, the rate was 160 deaths per 100,000 which was tied for the 2nd highest rate in the state. This rate was 4 times higher than the county Caucasian rate of 40 per 100,000.
Finally the COVID mortality rate for Cambria was 119 per 100,000. This was the 6th highest rate in the state. The overall rate was 88 per 100,000 in Pennsylvania. This death rate occurred on top of the other health issues enumerated in the County Health Rankings. It will take some time to sift out the relevant numbers for our county, I look forward to finding them.

Posted by CSI without Dead Bodies at 1:11:00 AM No comments:

Now it's Math Textbooks in Florida?

I have written about how my book was banned by the Johnstown Area Heritage Association in much the same way that Art Spiegelman's was banned by a school board in Tennessee.  I have also written about the message I received from Google about my blog posts on the Ukraine war.  Now it's math textbooks in Florida that are being banned because they supposedly discuss critical race theory (CRT).  In the video above, the Lt. Governor of Florida and Fox News talk about why this ban is a good thing with no examples of why these books were banned.

In this video, reporter Judd Legum discusses his review of some of the textbooks that were banned.  His group found no discussion of CRT or Social and Emotional Learning (SEL).  Now SEL is seen by many on the right as synonymous with CRT.  Why these things are a bad thing is beyond me.
CRT is a college level theory to study racism in institutions.  SEL is intended to teach children the emotional skills to better relate to one another.  The fact that many on the right cannot distinguish between the two suggests the need for more education of parents as well as children in critical thinking.
As an educator of statistics, I can tell you that it is always better to have teaching examples that students to which students can relate.  African American and Hispanic students often lag behind white students in math achievement.  These are important skills not only for balancing one's checkbook but for critical thinking in a variety of areas.
None of the skills learned in school are learned in a vacuum.  What is taught in one subject area spills over into the others.  Governor Ron DeSantis (who is hoping to take on former President Trump in 2024) emphasized "education not indoctrination" to justify the banning of books and his "don't say gay" bill.

How Do You Use and Consume Math?

Statement from Google on my Blog and Ukraine

This week I received this message from Google about my blog:

More than likely my posts were flagged by a natural language processing algorithm by Google rather than by a human censor. Chris Hedges' program On Contact was deleted by YouTube (which is owned by Google as is Blogger). He discusses this issue above.
I did have a post on LinkedIn flagged once as inappropriate. I appealed it and it was reinstated. I do not seem to have any similar recourse with Google. You can read a discussion of Google's censorship here.

Maus Censorship, JAHA, My Book and Me

Posted by CSI without Dead Bodies at 2:34:00 AM No comments:

I know that I have been slow in posting lately.  Sometimes life is so draining that it's hard to find inspiration.  COVID numbers have been dying down.  I'm still waiting for the County Health Rankings numbers.  I did show this video from Drunk History about Florence Nightingale to my classes. Many of my students were nursing majors and they got a kick out of this.  I'll show it to you too.

I'm also a Ben Franklin afficionado.  Here is the first episode of Ken Burns recent documentary on him.  You can watch it while available.  When it's gone below there is a 2002 documentary on him.
Posted by CSI without Dead Bodies at 3:09:00 AM No comments: